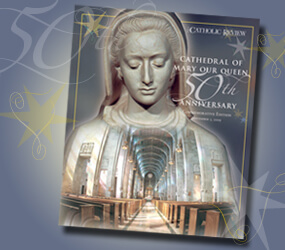 As flames inched their way toward O’Neill’s popular dry goods store, the well-known Irish merchant is said to have raced to a Carmelite convent. The devoted Catholic begged the nuns to pray for his business, pledging to God that he would build a great cathedral for Baltimore if his business was spared.

O’Neill apparently won the race, as a change in wind sent the conflagration in another direction just as it was about to envelop his store. About 1,500 buildings in a 75-block area were destroyed in the catastrophe, but O’Neill’s was not among them.

The philanthropist would be true to his word.

After his death in 1919, O’Neill bequeathed $5 million to Cardinal James Gibbons and his successors to be used “as a nucleus for, and for the erecting of, a Cathedral Church in the City of Baltimore.”

The Cathedral of Mary Our Queen, the limestone spiritual behemoth that towers over Charles Street in Homeland, is the product of O’Neill’s act of generous faith.

As the cathedral prepares to mark the 50th anniversary of its dedication with a 12:30 p.m. Mass celebrated Nov. 15 by Archbishop Edwin F. O’Brien, The Catholic Review looks at its long history, rich architecture and symbolic meaning.

Making it a reality

It took several decades after O’Neill’s death for the cathedral project to begin. The merchant had stipulated that the money was not to be used until after the death of his wife, Roberta. Although she died in 1936, the Great Depression and World War II delayed progress on the building.

Archbishop Francis P. Keough finally broke ground Oct. 10, 1954 for a building that was to represent “an adaptation of Gothic principles to modern expression.” In his remarks that day, Archbishop Keough said seeing the cathedral become a reality was “one of the great desires of my heart since coming to Baltimore.”

More than 6,500 cubic yards of concrete began to be poured in 1954 for the cathedral’s foundation, and stonework commenced the following year.

The cathedral took its name from a worldwide announcement made by Pope Pius XII one day after the groundbreaking. It was on that day, in the Marian month of October, that the pontiff instituted the feast of Mary Our Queen.

Archbishop Keough laid the cathedral’s cornerstone May 31, 1955 – the first celebration of the newly instituted feast. He placed a metal container inside the cornerstone holding documents and photos related to the cathedral, copies of The Catholic Review, secular newspapers and other items. The stone’s exterior proclaimed in Latin: “Ad Jesum per Mariam – “To Jesus through Mary.”

More than 1,000 workers and artisans completed the structure in time for Auxiliary Bishop Jerome Sebastian to consecrate it Oct. 13, 1959.

The formal dedication Nov. 15, 1959, was a celebration for the entire archdiocese, Maryland and the universal church. Archbishop Egidio Vagnozzi, apostolic delegate to the United States, celebrated the first Mass as two cardinals, 15 archbishops and nearly 100 bishops attended the liturgy.

Giving the homily was Baltimore’s own Bishop Lawrence J. Shehan, who was then bishop of the Diocese of Bridgeport, Conn. He would later lead his home diocese and obtain the rank of cardinal.

“It is true we live in a world whose future seems most uncertain,” said Bishop Shehan. “The erection of this cathedral, as solid in its masonry as the great medieval cathedrals constructed to endure for all time, is for us a profession of our faith and a declaration of our hope.”

Designed by the Boston architectural firm of Maginnis and Walsh and Kennedy (the same firm that designed nearby St. Mary’s Seminary and University in Roland Park), the Cathedral of Mary Our Queen’s highest points rise 163 feet from the bottom of the two front towers to the top of their spire.

Larger than St. Patrick’s Cathedral in New York by more than 40 feet, the Baltimore cathedral is laid out in the shape of a cross. Its central aisle provides the longest walk in the country for a bride on her wedding day, and chapels to St. Joseph and the Blessed Sacrament are at the end of each arm of the cross.

Because of O’Neill’s extreme initial generosity and the interest that grew on his original donation, little expense was spared in the ornamentation of the cathedral.

The church was erected at a cost of $8.5 million – the equivalent of nearly $62 million in today’s dollars.

Perhaps the two most striking features are the cathedral’s magnificent stained glass windows and carved stone sculptures – all designed to teach about the faith.

The colorful windows, particularly rich in endless shades of the Marian color of blue, were designed by seven American and two French companies.

The topmost, clerestory windows portray Old Testament themes. Below them, the windows and stone panels in each of the 11 bays on either side follow the events of the liturgical year, starting with the first Sunday in Advent. There are more than 920 saints, heroes and heroines displayed in the windows.

In the nave and side chapels, 780 spandrels, carved stone rectangles, stand between some of the frames of the stained glass. They feature geometric designs and 16 symbols for Mary.

Above the side aisles on each of the beveled arches are a series of 46 sculptured panels. Following liturgical themes, they are meant to serve as a biography of Jesus Christ.

A railing of rose marble separates the sanctuary from the nave, and a large crucifix hangs above the altar. The archbishop’s throne – the cathedra for which a cathedral is named – stands to the left and to the right is the pulpit with a stained oak canopy. The red hat of the late Cardinal Shehan hangs from the ceiling in the sanctuary.

The cathedral features numerous statues of saints, visible on the exterior of the building and within the structure’s many chapels.

Sheila Peter, a cathedral parishioner who leads tours of the building, said much of the cathedral’s beauty is found precisely in its symbolism.

“Every single thing in the building means something,” she said.

Over the last five decades, many liturgical events have matched the grandeur of the building that hosted them. In addition to parish sacramental celebrations, the cathedral is where people from throughout the archdiocese have gathered for Chrism Masses, priestly and diaconal ordinations, installation ceremonies for bishops and archbishops, graduations, concerts, funerals of prominent Catholics such as Johnny Unitas, interfaith gatherings and special events.

One of the highlights in the cathedral’s history came in 1995 when Pope John Paul II visited and led an ecumenical prayer service. It was the second time the pope had visited the cathedral, having prayed there in 1969 when he was archbishop of Krakow.

Cardinal Giovanni Montini visited the cathedral in 1960, three years before he would be elected Pope Paul VI.

As the cathedral moves into its next 50 years, Catholics are reminded that even as the grand building serves as a temple of God, so too must they themselves in their own lives. In a letter to Archbishop Keough at the dedication of the cathedral, Pope John XXIII emphasized just that point:

“If splendor and beauty befit a cathedral building in which sacred rites are enacted, where people gather for pious purposes and from which united prayers ascend to God for heavenly gifts,” the pope said, “how much more adorned with virtues should be our souls in which the Spirit of God deigns to dwell, and from which celestial grace gleams forth savingly for a witness unto others.”