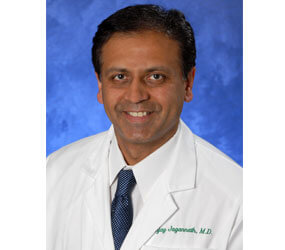 Difficult to diagnose because of a lack of easily recognizable symptoms, pancreatic cancer is often discovered too late to treat it effectively because the cancer has spread with lethal results, Dr. Jagannath explained.

(The pancreas is a gland, situated near the stomach that secretes a digestive fluid into the intestine through one or more ducts and also secretes the hormone insulin.)

Dr. Jagannath said, however, that there is “some hope” for early diagnosis because Mercy, along with some other major medical centers, like Johns Hopkins, have begun to focus on the pancreatic cyst as a way of stopping one of the most deadly cancers from forming, he said. Up to 20 percent of pancreatic cancer begins as one of these small, fluid-filled brown lesions.

Left to grow unabated, pancreatic cancer kills 95 percent of sufferers within five years, more men than women for some unknown reason. There are about 43,000 cases a year nationwide, compared to more than 200,000 cases each of breast, prostate and lung cancer.

The goal, Jagannath said, “is to approach pancreatic cysts the same way we do for polyps in the colon – remove them and prevent cancer.”

Mercy physicians are now using endoscopic ultrasound imaging as what Jagannath called “a good screening test” for the pancreatic cysts.

Unlike colonoscopies, though, which are regularly given to middle-aged and older men as a matter of course, endoscopic ultrasound examinations searching for pancreatic cysts aren’t available in the same way to the majority of patients. That is the case, Jagannath said, primarily because most health insurance won’t cover the procedures and because there may not be a compelling reason for most patients or their primary physicians to call for them in the first place.

And, he said, it is difficult to determine who may be at risk other than those with a close family history of pancreatic cancer.

“For 80 percent of people who get it, it’s just dumb luck,” Jagannath noted wryly.

A recent study published in the American Journal of Gastroenterology found that up to 13 percent of the population has a pancreatic cyst, though most do not become cancerous. Researchers studied patients who had undergone an MRI for a reason other than their pancreas, and such routine screening for other health concerns has become the main method of discovering pancreatic cysts.

While the identification of pancreatic cysts and their removal before any cancer can spread is a promising diagnosis and treatment modality, the battle against the killer, although making progress, is far from over.

“There’s a lot of work, study and research going on and I’m sure we’ll beat it in my lifetime,” said the 42-year-old pancreas specialist, a conviction which suggests that effective prevention, let alone a “cure,” is not exactly just around the corner.

That being said, provocatively hopeful research is indeed underway.

Hopkins researchers, for example, are conducting a trial, now in its early stage, for a vaccine that might eventually become an effective tool in the treatment of pancreatic cancer.

And, according to a report in the Irish medical magazine, Scope, University of Pennsylvania Abramson Cancer Center researchers, led by an Irish physician, Dr. Peter O’Dwyer, not only found that an experimental antibody caused pancreatic tumours to shrink significantly in a small cohort of patients, they also believe their findings – and the novel way in which they uncovered them – could lead to quicker, less expensive cancer drug development.

Until now, it was assumed that the immune system needed to attack the cancer cells directly in order to be effective, however, this new research revealed that so-called CD40 antibodies could trigger the patient’s own immune system into shredding the structural “scaffolding” that holds tumours together.

“So, there really is some promising stuff happening out there,” Jagannath said. “And, yes, I do really have hope.”