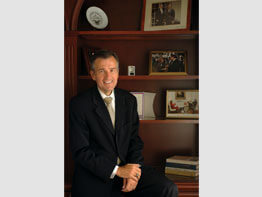 WASHINGTON – For Pepperdine law professor Douglas Kmiec, a constitutional lawyer who often writes on religion in the public square, the situation had uncomfortable echoes of the last presidential election cycle – a priest was refusing to give Communion to someone on the basis of the man’s support of a candidate.

This time, though, the surprised Massgoer turned away by a priest was Prof. Kmiec himself. The former dean of the law school at The Catholic University of America in Washington is an architect of the Reagan administration’s stance against abortion whose pro-life credentials include serving as keynote speaker at the March for Life’s annual Rose Dinner a few years ago.

When the priest upbraided the law professor from the pulpit for his endorsement of presidential candidate Sen. Barack Obama of Illinois and then refused to give him Communion, Prof. Kmiec was stunned, he told Catholic News Service June 4 in a telephone interview. (Since 2002 Prof. Kmiec has been a columnist for CNS.)

The incident occurred at a Mass preceding the meeting of a Catholic business group in California at which Prof. Kmiec was the featured speaker. Sen. Obama, now the presumptive Democratic nominee for president, has voted to support legal abortion and opposed legislation that would restrict abortion.

In endorsing him, Prof. Kmiec has explained that he was drawn to Sen. Obama’s “remarkable ‘love thy neighbor’ style of campaigning, his express aim to transcend partisan divide, and specifically, his appreciation for faith.”

At the event, Prof. Kmiec wrote, the priest “excoriated my Sen. Obama-heresy from the pulpit at length and then denied my receipt of Communion.”

Prof. Kmiec told CNS he initially did nothing in response except to write a letter to the priest, whom he has identified only as “a very angry college chaplain.”

In the letter, Prof. Kmiec said, he explained to the priest that both of them were concerned with defending innocent life, and that he believes the chaplain is mistaken in concluding that Prof. Kmiec’s endorsement of Sen. Obama constitutes an adequate theological or pastoral reason to have denied him Communion. He said the priest’s response was brief, saying only that he would pray for Prof. Kmiec.

At the urging of his pastor, Prof. Kmiec said he also wrote to the provincial of the chaplain’s religious order, explaining what happened.

“I’m extremely confident the provincial of his religious order will have the necessary conversation with him,” he told CNS.

He said he also was pleased to hear that Los Angeles Cardinal Roger M. Mahony had weighed in on the matter, in comments by his spokesman, Tod Tamberg, first included in a National Public Radio report.

Mr. Tamberg told CNS that the priest’s action in refusing Communion to Prof. Kmiec “was absolutely indefensible” both as a matter of canon law and the policies and practices of the Archdiocese of Los Angeles.

“The archbishop’s office is well aware of the situation and will be responding in an appropriate manner,” he added. He confirmed that the event had occurred in the Archdiocese of Los Angeles.

Prof. Kmiec had in March endorsed Sen. Obama in an article published online in Slate magazine.

“I take him at his word that he wants to move the nation beyond its religious and racial divides and that he wants to return the United States to that company of nations committed to human rights,” Prof. Kmiec wrote. He noted that he and Sen. Obama disagree on “important fundamentals” including legislation about traditional marriage and that life begins at conception.

However, he said, “I am convinced, based upon his public pronouncements and his personal writing, that on each of these questions he is not closed to understanding opposing points of view and, as best as it is humanly possible, he will respect and accommodate them.”

He followed up that piece by writing May 15 for Catholic Online. There Prof. Kmiec said his Sen. Obama endorsement “baffled my political pals; it infuriated some of my fellow Catholics.” Some online writers for blogs had declared he was “self-excommunicated,” he wrote, and Prof. Kmiec went on to describe being denied Communion before the business event.

Prof. Kmiec told CNS he decided to write about the situation some weeks after it happened when he began to hear other people who hadn’t been there talking about it.

At about the same time, he read columnists who complained about some Catholic politicians receiving Communion during liturgies celebrated in New York and Washington by Pope Benedict XVI. Another writer raised the prospect that Sen. Obama might be subject to an Islamic punishment of beheading because he became a Christian after being born to a Muslim father.

“I thought we were really getting to the point where religion was being treated as a weapon,” he told CNS. He thought the column could end speculation and rumors.

Prof. Kmiec said his pastor convinced him not to let the incident go unanswered.

“He told me, ‘You may be resilient, but another person to whom this happens, it may destroy their entire faith,’“ Prof. Kmiec said.

After the last presidential election cycle, when Democratic nominee Sen. John Kerry, D-Mass., a Catholic, was barred from receiving Communion by a handful of bishops, Prof. Kmiec said he believes the religious environment around this year’s race is more healthy.

By a vast majority, he said, most U.S. bishops and church leaders are consistently good teachers on the range of political responsibilities expected of Christians. However, he added, “if we continue to use religion as a political weapon then we’ve failed.”