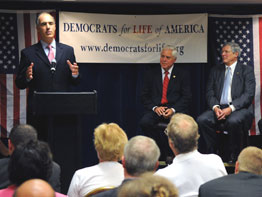 DENVER – Voters should judge U.S. Sen. Barack Obama, the Democratic presidential nominee, on the whole of his record and political vision rather than concentrating on one topic such as abortion, said U.S. Sen. Bob Casey Jr., D-Pa.

“I don’t make a determination on how to vote for them or support them based upon one issue, even on a very important issue like abortion. That’s the approach I take, and that’s the approach I ask voters to take of me,” Casey told Catholic News Service Aug. 27 in an interview during the Democratic National Convention in Denver.

“When I campaign for public office, I go before the voters of Pennsylvania and present my background as well as my positions on a whole slew of issues and say, ‘Vote for me based upon a whole set of criteria,’” he added. “That’s the same approach I take when it comes to a presidential candidate.”

Casey ran as a pro-life Democrat during his successful senatorial campaign in 2006. In a speech to the Democratic National Convention at Pepsi Center Aug. 26, Casey shared advice his legendary father, the late Pennsylvania Gov. Bob Casey, would give regarding using power to help people.

“Gov. Casey used to say that the ultimate question for those in public office is this: What did you do when you had the power?” he said.

Casey told CNS that he is using his power as a U.S. senator to help support pro-life legislation, including the Pregnant Women Support Act that he introduced in the Senate during the last congressional session. Casey introduced the act as a means to reduce abortions and give pregnant women more options.

“Part of it is making sure that when votes are in front of the U.S. Senate, you’re voting in a way that’s pro-life, and that’s in a very broad way,” said Casey. “I think the term pro-life gets defined very narrowly by some; intentionally narrowly so they can contain their political position. I think it pertains to votes on abortion, which I have a long record on, but also votes that relate directly to helping families and helping children.”

Casey briefly touched on his difference on abortion issues in his speech to the convention.

“Barack Obama and I have an honest disagreement on the issue of abortion. But the fact that I’m speaking here tonight is testament to Barack’s ability to show respect for the views of people who may disagree with him,” said Casey.

At a town hall meeting sponsored by Democrats for Life of America Aug. 27 at the Monaco Hotel, Casey also addressed Obama’s comments at a March town hall meeting in Johnstown, Pa., where Obama said that if one of his daughters were to become pregnant he wouldn’t want her to be “punished with a baby.”

Casey discussed hard economic times in Pennsylvania during his speech to the convention, placing blame for a lagging economy on the administration of President George W. Bush and linking it to the presumptive Republican presidential nominee, Sen. John McCain of Arizona.

“The Bush-McCain Republicans inherited the strongest economy in history and drove it into a ditch,” Casey said. “They ran up the debt, gave huge subsidies to big oil companies, and now they’re asking for four more years. … We can’t afford four more years.”

Casey’s speech represented a homecoming of sorts for his family as well as for pro-life Democrats on the national level. His father was not allowed to speak at the 1992 Democratic National Convention, reportedly because of his strong pro-life views.

The younger Casey said Obama is “much more open and willing to speak (with those) who had a difference of opinion on very important issues” than past Democrats were. He said he was constantly thinking of his father’s legacy as a strong pro-life Catholic Democrat while delivering his address.