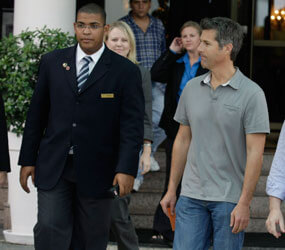 Sometimes he appeared solemn-faced and off to the side at press conferences while an obviously distraught Goldman pleaded for the return of his 9-year-old son, Sean. Other times he was in front of the microphone, making the case for Goldman’s parental rights.

The boy was taken to Brazil five years ago by his mother and kept there even after her death by her wealthy second husband and powerful family through a convoluted series of legal maneuvers. It was a human drama that captivated the world and led to the American father’s reunion with his son on Christmas Eve.

But for Smith, who is Catholic, it was a process that was “enveloped in prayer.”

In a Dec. 29 interview with The Monitor, Trenton diocesan newspaper, Smith recalled spending three hours with Goldman in the Brasilia cathedral on Feb. 24, 2008.

“While we were there,” he recalled, “there was a novena to St. Faustina and we sat through it listening to the singing in Portuguese. The phraseology sounded like an encouragement … not bells and whistles you understand, but an encouragement.”

Smith would be the first to say that faith drives him. “Not the kind you wear on your sleeve,” he said. “I’ve never worn my faith on my sleeve and I never will.

“But when you ask me if I do (this work) as a believer, I will tell you that I do it as faithfully as I can,” he said.

Smith, who co-chairs the House Pro-Life Caucus, said getting involved with Goldman’s quest was just part of the mission entrusted to him over the years as a legislator. It’s a mission he regards as seamlessly interconnected to the human rights issues he has embraced over nearly four decades.

“My parents inculcated me in the importance of helping the underdog,” he said.

Twelve years of Catholic education at St. Cecelia School in Iselin and St. Mary High School in Perth Amboy grounded him, he said, in the need to “stand up against injustice.”

An opponent of capital punishment, abortion and embryonic stem-cell research, Smith has been equally devoted to combating human trafficking, torture and religious persecution. The rights of immigrants, environmental concerns, veterans’ needs and fair labor practices all have been part of his agenda.

In 28 years in Congress, his legislative legacy so far ranks him third out of 435 members in the House of Representatives whose bills have become law.

When asked about his body of legislative work, Smith responds with Scripture. “All this is Matthew 25,” he said. That chapter says in part, “Whatever you did for one of these least brothers of mine, you did for me.”

Helping to reunite David and Sean Goldman is but the latest application of Matthew 25, Smith said.

“What you do for the least of our brethren includes the family, the left-behind parent,” he explained.

On July 16, Smith introduced for himself and several co-sponsors a bill called the International Child Abduction Prevention Act, aimed at ensuring compliance with the 1980 Hague Convention on the civil aspects of international child abduction.

He says real “systematic change” is necessary to bring more than 2,800 abducted children home to the U.S.

The bill, he said, includes “18 new actions the (president and secretary of state) could take against a country in a pattern of noncooperation” to see that a child is returned home. These include withholding foreign aid and cultural exchanges, loan guarantees and imposing economic sanctions.

Smith’s role in the Goldman case sparked involvement with a “whole group of left-behind parents” from around the country for whom he has become a legislative point person.

“We’re working now on a (legislative) package which, I believe, would get countries complicit in child abductions to work with the left-behind parents,” he said.

The cases “just tug at your heart,” Smith added. “We’re going to pass the legislation. We’re serious about it.”