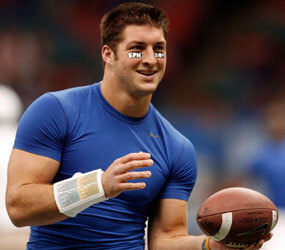 NEW YORK – An ad scheduled to air on CBS during the network’s broadcast of the Feb. 7 Super Bowl has generated criticism from groups such as the National Organization for Women because of its pro-life message.

The 30-second spot will feature recent University of Florida graduate Tim Tebow, the Gators’ star quarterback who graduated in December. The 2007 Heisman Trophy winner led his team to victory in the Sugar Bowl Jan. 1.

Sponsored by Focus on the Family, a Christian advocacy group based in Colorado Springs, Colo., the ad reportedly will highlight Tebow’s mother, Pam, who decided against medical advice not to abort him. Pam suffered from a dangerous infection during a mission trip to the Philippines, and doctors recommended that she terminate her pregnancy, fearing she might die in childbirth or the child might be stillborn.

A spokesman for the organization said the theme of the ad is “Celebrate Family, Celebrate Life,” but he would not comment on the content of the ad.

Several women’s groups have complained to CBS about the ad, urging it not air, but the network released a statement Jan. 26 saying it was standing behind the ad. The network said it has revised its policies on advocacy ads in recent years as have other media outlets.

NOW and other women’s groups, such as the Women’s Media Center, an organization that says it works “to make women visible and powerful in the media,” have called the ad divisive and inappropriate for the setting. They also complained that in previous years networks have banned issue-oriented ads sponsored by the People for the Ethical Treatment of Animals, MoveOn.org and the United Church of Christ.

The Tebow spot is the first Super Bowl ad sponsored by Focus for the Family. A statement on the group’s Web site by Jim Daly, the group’s president and CEO, said the “chance to partner with the Tebows and lift up a meaningful message about family and life comes at the right moment in the culture, because families need to be inspired.”

He said funds for the ad, said to cost about $2.7 million for 30 seconds, came from donors who specifically wanted to support the project.

Tebow, who was home-schooled until college, is known for outwardly expressing his Christian faith. He puts references to Scripture passages on his eye black, patches football players wear under their eyes to prevent glare.

He discussed the ad with reporters in Mobile, Ala., Jan. 24 where he was playing in the Senior Bowl, a college all-star game. The football player said he knows some people won’t agree with the ad’s message but he hopes they can “at least respect that I stand up for what I believe.” He’ll enter the National Football League’s draft in April.