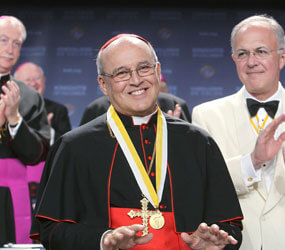 WASHINGTON – The release of the first 20 of 52 political prisoners the Cuban government has promised to set free is a hopeful sign for the country, said Havana Cardinal Jaime Ortega Alamino.

While the government’s release of prisoners certainly is popular in Cuba, where dissatisfaction with the economy and other issues has been growing, Cardinal Ortega told Catholic News Service Aug. 2 that the main benefit to the Castro government has been improved foreign relations. Cuba’s treatment of political opponents has long been a key element in the nearly 50-year U.S. economic embargo of the nation.

“In the internal life of Cuba, this is not very important,” Cardinal Ortega said. “But for foreign relations, it’s very important.”

Cardinal Ortega was in Washington to accept the “Gaudium et Spes” Award from the Knights of Columbus. It is the fraternal organization’s highest honor.

The cardinal said Cubans have been especially grateful to the Catholic Church for its role in the prisoner releases. He said that as he went out to buy something for his trip to the U.S., “many, many people stopped me on the street, saying ‘thank you, Cardinal.’ ”

He said before he and the president of the Cuban bishops’ conference, Archbishop Dionisio Garcia Ibanez of Santiago met with President Raul Castro in May, tensions in Havana were threatening to become as volatile as they were around the 1980 Mariel boatlift. Then, at a time of economic downturn, the government opened the port of Mariel to all who wanted to leave Cuba, and boats from the United States quickly arrived to help them. About 125,000 Cubans ultimately resettled in the United States as a result of the Mariel releases.

Cardinal Ortega explained that he asked to meet with Castro amid a crackdown this spring on weekly silent marches by wives and mothers of political prisoners, known as the Ladies in White, who want freedom for their relatives. The usually quiet marches that begin after Sunday Mass were met by counter-protesters – allegedly brought in by the government – who shouted and blocked the women, harassing the group for hours.

“It was beginning to look like the time of Mariel,” said Cardinal Ortega. “It was causing instability.”

After several weeks of this, Cardinal Ortega said, he wrote to Castro. The letter went out on a Monday and by Thursday, he had been contacted by a government official, seeking to arrange a meeting with the Ladies in White. At that meeting, the women asked for relatives who were imprisoned far from their homes to be moved closer to their families and for the release of those who were in poor health. Those requests soon were being met, and the counter-protesters stopped harassing the women on the weekly marches.

“After that first meeting, we began a conversation (with the government)” said Cardinal Ortega.

After a follow-up meeting with Castro in July, the cardinal announced that Castro had promised to release a group of prisoners who had been held since a 2003 crackdown on political opposition.

Cardinal Ortega said he met with diplomats at the U.S. Interests Section, which serves in place of an embassy for some government functions. He said he was told the prisoners could not come immediately to the United States. The U.S. “wanted to take a low profile,” he said, adding that the diplomats told him requests for political asylum would have to be processed individually.

In the meantime, the Spanish government agreed to allow the ex-prisoners to go to Spain, though nearly all would prefer to resettle in the United States, where they have relatives, the cardinal said. Some have said they would refuse to be sent out of the country, and it remained unclear whether that would affect their release. Cardinal Ortega added that he expected the remainder of the 52 to be released in the next couple of months.

He said the Cuban people’s biggest current frustration is the weak economy. Castro announced some economic changes in a July 31 speech opening the biannual session of Parliament, including scaling back controls on small businesses, allowing more self-employment and laying off unnecessary government workers.

The cardinal said he had not read Castro’s speech yet, but that he found the announcement encouraging.

Beyond their economic struggles, the cardinal said a high priority for most Cubans is that they have better means of communicating within the country and beyond. While people are allowed to use the Internet, for example, it’s quite costly and runs poorly because of inadequate infrastructure, he said.

“To communicate easily with their relatives and to be able to go to the U.S. for visits and then return to Cuba,” that’s what people want, the cardinal said.