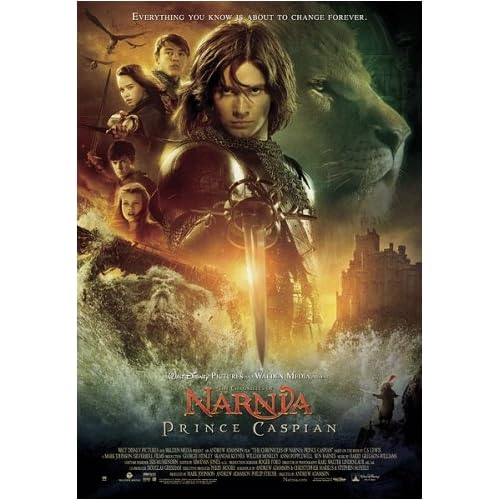 Two years ago, I posted the blog below on our old blog format on CatholicReview.org. Since we’re talking Narnia and Aslan today, I thought I would share this blog from 2008. It was posted after I saw “Prince Caspian,” the sequel to “The Lion, the Witch and the Wardrobe.”

Search for Aslan… and God in Narnia

That’s the question many characters are asking throughout Prince Caspian, the second movie adaptation of C.S. Lewis’ Chronicles of Narnia. Although, to be fair, the creatures that populate the magical land, which is no longer accessible through big closets, are looking for Aslan.

Steer clear of this blog because it’s going to delve into spoilers of the new movie which, judging by box office receipts, not enough of you are seeing.

The titular animal in the first movie, The Lion, the Witch and the Wardrobe, has gone on a 1,300-year sabbatical through the woods.

During his, and the Pevensie children’s long absence, the creatures of the land have been ravaged through war and purged through ethnic cleansing by scheming human beings who love to maintain their positions of power and to talk with terrible accents.

Aslan, who squared off with the devil incarnate in the White Witch in Wardrobe, is barely seen in the latest movie. He’s become nothing more than legend and some doubt his existence simply because so much pain exists in the world.

When we finally do catch a glimpse of Aslan, his attitude is so cavalier about the destruction brought to his people that it’s off-putting. He’s lying on some grass when the innocent Lucy stumbles upon him.

He looks at her like a guy does when he’s pretending not to be interested in a girl.

I’m pretty sure he even says something like, “It took you long enough. There’s a pizza in the fridge.”

During a recent screening of Caspian, people walked out of one local theater miffed, saying: “Aslan’s kind of a jerk.”

Innocent blood is being spilled and the all-powerful lion with magic breath has his feet kicked up on the couch like he’s waiting for Jeopardy to come on at 7:30 on Channel 2.

When it appears the Narnians might have everything in the bag, then Aslan shows up to display his power and finish off the bad guys, as if to say: “Pretty cool, huh?”

Once he does that, Narnians who doubted Aslan are left to drop to their knees in reverence. Why were they so blind?

There has always been a debate about Aslan as an allegory for Jesus Christ. When he sacrificed himself for the sins of others in Wardrobe, it sealed the deal for some. Lewis, meanwhile, rejected the notion his famous character was a stand-in for Jesus throughout his Narnia books, despite some eerie similarities.

In Caspian, however, it appears that Lewis was trying to rise above what was perceived to be kid’s play in Wardrobe and speak to war-ravaged Europe. With all the horrors inflicted by Hitler’s regime in Germany, people were left asking: “How could God allow this happen?”

The movie doesn’t answer Aslan’s ambivalence well-enough. In both Narnia movies, the enslaved people solve their problems with violence and the children go happily back through a portal.

In the real world, we spend so much time wondering when God is going to show up, we aren’t willing to put in the work to find him in our every day lives. He’s set up this magnificent world for us and often we seem like we’re all just trying to tear it apart.

Eventually, we’re going to have to find the Divine in each other and ourselves to truly appreciate the world He gave to us.