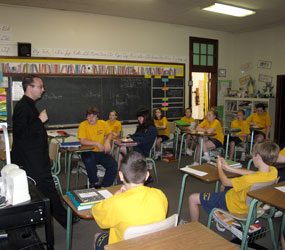 ESSEX – At age 5, Our Lady of Mount Carmel kindergartner Kamran Jagadesan knows what he wants to be when he grows up: a priest.

So, he was exceedingly excited to see that the associate pastor of the adjoining Essex parish, Father John Rapisarda, was coming to the school May 16 to talk for World Vocations Day.

“He teaches about God and he gives me the idea to teach other people about God when I’m a priest,” Kamran said.

Archbishop Edwin F. O’Brien asked Archdiocese of Baltimore priests to visit schools May 16 to talk about vocations with young people. They asked students to consider vocations and pray for more in the Catholic Church.

In a letter to archdiocesan priests, Archbishop O’Brien wrote, “your presence can be a great encouragement for the children we nurture in our faith and who may be inspired by your priestly witness.”

Father John Rapisarda’s own father, Father Gregory Rapisarda, was ordained a priest a year ago after years as a deacon. He now serves as associate pastor of St. Louis in Clarksville and visited his parish’s school on World Vocations Day.

Nearly three years since he was ordained a priest in the archdiocese, Father John Rapisarda said his priesthood “continues to be a joy beyond words.”

He said he is in constant awe of celebrating Masses and hearing confessions. He regularly visits Mount Carmel’s elementary and high schools and interacts with students in the lunch room.

Father Rapisarda visited a fifth-grade classroom May 16. He asked the students what they are called to do each day. One student offered, “to be God’s child.”

Father Rapisarda elatedly bounced around the classroom after the answer, before explaining that vocations are not only what people do, but also who they are.

Father Rapisarda told The Catholic Review he was once like Kamran. As a school boy at Bel Air’s St. Margaret School, he said priests provided solid examples of faith. He wants young people to feel the same way.

For more on this story, visit CatholicReview.org/palmerblog on May 19.