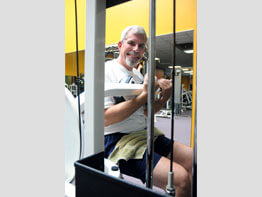 WASHINGTON – With studies confirming that a high percentage of U.S. clerics are overweight and lead inactive and nutritionally unhealthy lifestyles, several Catholic leaders in interviews with Catholic News Service said priests should focus on their bodies with the same care they give the souls of their parishioners.

“We should remind our priests to take the time for relaxation and physical exercise,” said Baltimore Archbishop Edwin F. O’Brien, himself a physically fit 69-year-old Catholic leader. “It’s very important for their health and their ministry.”

A 2001 national survey of more than 2,500 Christian religious leaders – conducted by the pastoral leadership research project “Pulpit and Pew” based at Duke Divinity School in North Carolina – said that 76 percent of Christian clergy were either overweight or obese, 15 percentage points higher than for the general U.S. population.

The “Pulpit and Pew” study was the largest of recent surveys conducted on the health of U.S. clergy of several Christian denominations, all reaching similar conclusions.

“I probably would agree with that finding, because I know a lot of overweight priests,” said Father David Garcia, director of the Old Spanish Missions in San Antonio. “I’m determined not to ever become one.”

The 58-year-old priest – who combines a strict regimen of running, weight lifting and martial arts six days a week to maintain a body fat percentage of 13 on his 5-foot-7-inch, 148-pound frame – believes his body is a gift from God and that it’s his duty to be a good steward.

Though Father Garcia has been athletic since he was a child, he said that five years after his ordination he became the secretary to his archbishop and began attending high-profile social functions that came complete with servings of rich foods. Six months into the job at the age of 30, he noticed his pants had become pretty snug.

“I looked in the mirror and asked myself, ‘Do you want to be a fat old man before your time?’“ he said. “So I looked at my lifestyle, began to study nutrition, began to run … and then diversified my workout program. It’s been a big part of my priesthood. You’re more aware of yourself, and the gift of life. When we let our bodies go, we really in a sense misuse or abuse the gift that God gave us.”

Father Garcia said bishops need to do a better job promoting ongoing exercise routines and a healthy diet to their priests.

It’s easy for clergy to fall into a sedentary lifestyle with a work schedule that has them on call 24 hours every day of the week and also to indulge in unhealthy foods provided at the numerous social functions and potluck dinners they are required to attend, said Susan Gibbs, spokeswoman for the Archdiocese of Washington.

“It is a problem and it needs to be addressed by the bishops in each diocese,” said Father David L. Toups, a priest of the Diocese of St. Petersburg, Fla., who is associate director for the Secretariat of Clergy, Consecrated Life and Vocations for the U.S. Conference of Catholic Bishops.

“As the bishops look at accountability of priests, that physical accountability has to be there, for their own well-being and the well-being of the people they tend to,” he said. “It’s about making sure their physical and spiritual needs are being met and about them being credible witnesses for God.”

Some U.S. Catholic dioceses have established sports leagues and marathons designed for participation by priests and women religious, fashioned exercise centers in diocesan buildings and routinely encouraged seminarians to pay careful attention to the well-being of their bodies.

In general, younger priests lead healthier lifestyles than older clergy, said Father William M. Joensen, 48, of the Archdiocese of Dubuque, Iowa, and a philosophy professor at Loras College in Dubuque, which has a small number of seminarians in its St. Pius X Seminary Program.

“You can attribute some of that to a generational philosophy which places physical fitness as a priority,” said Father Joensen, himself an avid bicyclist who was spending part of June in Spain on a cycling trip.

“But, we also stress in priestly formation that it is important to avoid reverting to a sedentary lifestyle and to focus on staying active. This becomes an issue in their evaluations, when I work with them as a spiritual director,” he said.

In the late 1990s the Archdiocese of Seattle offered priests rewards for participating in a wellness program designed by a local medical center as an incentive to adopt healthier lifestyles, complete with better nutrition and physical activity.

A few years ago several pastors of the Archdiocese of Baltimore volunteered to participate in an archdiocesan parish leadership analysis, and after an independent consultant interviewed parishioners of St. Dominic, she told the pastor of the parish – Father James P. Kiesel – concerns about his health had been overwhelmingly raised by his flock.

“It was a wake-up call for me,” said Father Kiesel, 51. “I certainly was aware that I was out of shape, but hearing the concerns from the people around me drove home the point.”

The pastor joined a gym, developed a workout program and within 18 months shed 40 pounds and gained more than muscle tone for his 6-foot-1-inch frame. He said he achieved stronger concentration skills for his ministry and a deeper connection with God.

Since parish priests have unusual work schedules tending to the spiritual needs of the faithful at Masses, funerals, weddings, hospital visits and individual consultations around the clock, many don’t find the time for a regular exercise routine, Gibbs said.

“The problem with that kind of thinking is, it’s a vicious cycle,” Father Garcia said. “The more you give yourself permission not to take care of your body, the more your body deteriorates. Then you get sick more often and then you have less time for your ministry. Taking care of my body is as important as praying. If priests are too busy to pray, then we have a real problem.”

It’s crucial for priests to make the time commitment for routine physical activity and to stick to the schedule, even if it means other pastoral demands have to wait, he said.

Father Joseph G. Bochenek, the 63-year-old pastor of St. Brigid in Baltimore, found the best way for him to keep physically active and fit was to join an activity with members of his parish.

So, when an old friend asked him if he could use a building on his parish’s campus to run an Okinawa Shorin Ryu Karate school five years ago, Father Bochenek gave him access to space rent free, joined the program and encouraged parishioners to enroll in the twice-weekly class.

“It’s offered me discipline, balance, physical fitness and tranquility,” he said. “For the group, it’s offered us companionship in a wholesome and friendly atmosphere.”

Because many diocesan priests live alone, it’s easy for them to fall into the trap of eating junk food and spending their leisure time in a sedentary way, which is why group activities can be beneficial for priests, Father Joensen said.

“I tell seminarians that it’s important to become involved in prayer groups, especially among other priests, where priests are looking out for each other,” he said. “This way, you can lead more by example. I’ve been in my prayer group for the past 15 years. There are six of us in it and three of us cycle, several of us belong to fitness centers and one works with a personal trainer.”

Physically fit priests also have more credibility when espousing the virtues of being a good steward of one’s body to members of their congregation, Father Garcia said.

“We should practice what we preach and we have to remember we’re leading by example,” he said. “The bishop of a diocese can do the same for his priests. By himself taking care of his health, he can show them how to take care of their body and that it’s important to keep life in balance with prayer, eating, exercise and stimulating the mind, and then doing the hard work.”