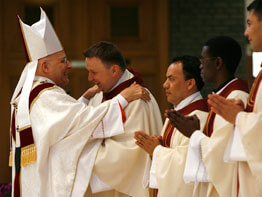 CHICAGO – None of the 11 new priests the Archdiocese of Chicago ordained May 17 were born in the archdiocese, or even in the United States.

Five are from Poland, products of the Bishop Abramowicz Preparatory Seminary program that brings Polish seminarians and forms them to be Chicago priests. Two are from Mexico, one from Ecuador and one from Colombia – all products of Casa Jesus, a house of formation for Spanish-speaking young men considering the priesthood.

And two are from Tanzania, and came through Tuite House, a program at St. Joseph College Seminary for African and African-American young men who are discerning whether they have priestly vocations.

While the archdiocese welcomes the foreign-born priests with open arms – and invests time and money in helping them learn about American culture, the American church and American English – they won’t have the familiarity with the people of many native-born priests, according to priests who work with them and with native-born Catholics who are considering the priesthood.

Father Richard Klajbor, the outgoing rector of Bishop Abramowicz, is rightfully proud that 20 priests who are graduates are now serving the archdiocese.

Abramowicz Seminary was founded in 2000 to bring Polish seminarians to Chicago to serve the area’s Polish community, although the young priests often are assigned to parishes without established Polish ministry to help continue to acclimate them to American culture.

“Immigrants look to their priests to be a bridge between their cultures,” said Father Klajbor, a fourth-generation American of Polish ancestry. “They want the priest to be a tie to the country, but also to stay connected to their home country. They need to have one foot solidly in each world.”

But the archdiocese also needs to tend its own garden and find the men God is calling to the priesthood here, Father Klajbor said in an interview with the Catholic New World, Chicago’s archdiocesan newspaper.

“Those men bring an expertise that our folks don’t,” he said. “It is a problem that we are not filling our own needs.”

“I think a native son will always understand the people better,” he said.

Father Noonan doesn’t expect another year with no native-born priests ordained, although the numbers for the next few years will likely be small.

Part of the problem this year reached back to 2002, when the clergy sex abuse scandal broke in Boston.

“Six years ago was when most of the men ordained this year would have been in their discernment process,” Father Noonan said. “What happened six years ago? The Boston sex abuse scandal.”

The scandal, which started in Boston, extended across the United States and led to changes in the way many American bishops respond to allegations of priestly sexual abuse with their approval of the “Charter for the Protection of Children and Young People” in 2002.

The scandal shook the confidence of many Catholics in the church, and damaged the morale of many priests. Most newly ordained priests say an invitation to consider the priesthood was instrumental in their vocation stories, Father Noonan said, and if priestly morale was low, it stands to reason that not as many of them were making those invitations.

But the news going forward is good.

Father Noonan said there are 14 men who are working with his office to apply to the University of St. Mary of the Lake/Mundelein Seminary next year. Of that number, he would expect about 12 to begin studies there in the fall.

Of the 14, 12 were born in the archdiocese, one was born elsewhere in the United States and one was born in Poland but came to the Chicago area as a child.

Another nine men, graduates of St. Joseph College Seminary, are expected to start at Mundelein in the fall as well. Another will continue his studies to be a Chicago archdiocesan priest in Rome, said Father James Presta, rector at St. Joseph.

But even if all the men considering the major seminary enroll in the fall, no one expects all of them to become priests.

“In seminaries, the rule of thumb is you expect to lose about 10 percent a year,” Father Noonan said, with the seminary asking some to leave and some deciding on their own they don’t have a vocation to the priesthood. “You don’t want to ordain just anybody.”