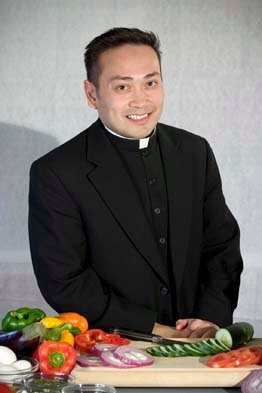 ARLINGTON, Va. – What began as a joke in the kitchen will become a published cookbook this fall and possibly a TV cooking series next fall, said Father Leo Patalinghug, the break-dancing, martial-arts guru who also happens to be a skilled cook.
The media project, “Grace Before Meals,” aims to bring families together around the table, said Father Patalinghug, a Baltimore priest who recently was appointed to serve as director of pastoral field education at Mount St. Mary’s Seminary in Emmitsburg.
Although there is an undeniable novelty about watching a priest host a cooking show, Father Patalinghug said what is most important is the effort to get families to come closer together. The cookbook and the show are simply the vehicle to make that happen and to “strengthen families,” because families are the “domestic church,” he said.
The show, in which the priest will visit families and cook with them, will air on PBS next year if the production company is able to find enough sponsors, said Father Patalinghug, who said family meals are essential to the integrity of the family.
“It’s a movement before a TV show,” he said. “It’s God’s movement to bring God’s family to his table.”
The cookbook, subtitled “Recipes for Family Life,” will be published this fall. Each recipe is linked to a feast day in the liturgical year, a family milestone or even disappointments. Cooking gives families a reason to come together, said Father Patalinghug.
Filled with Scripture passages and essays about various feasts, the cookbook includes 50 original home-style, comfort-food recipes created by the priest.
Father Patalinghug calls the book “bite-sized theology.” Every meal has a reason to celebrate, and the combination of faith and food “makes faith bite-sizable for the entire family,” he said.
While in the seminary at the Pontifical North American College in Rome, Father Patalinghug would cook for his fellow seminarians on his days off. He still enjoys cooking.
“You could see what a good meal does. It makes people smile. It doesn’t have to be a big snobby meal. It has to have a purpose,” he said.
The idea for the TV show surfaced while Father Patalinghug was cooking for some priest friends when one said he wished he had a video camera to document a priest cooking. Recalling the events, Father Patalinghug said, “It’s not a typical way a TV show comes about. We were just goofing off.”
But when Father Patalinghug was transferred to St. John Church in Westminster, he met Tim Watkins, a parishioner who was also a television producer. Although he kept insisting that it was just a joke, Father Patalinghug realized after prayerful discernment that God was calling him to take on the project of “Grace Before Meals.”
He teamed up with Renegade Production Company and took on the “opportunity for families to come closer together – that’s what I do as a priest … strengthen families.”
The entire project is under the guidance of the Holy Spirit, he said. “If we take the Holy Spirit out of it, then we’re talking about fast food,” he said.
Continuing the analogy, he said, “God uses a crockpot. He takes his time. This will force us to become patient. It makes me put my message into practice.”
Cooking and serving in the kitchen are not something new to Father Patalinghug. “I love food,” he said with a broad smile. He recalled his childhood days when he was “easily bored” and would happily comply with his mother’s request to help her in the kitchen cutting vegetables or stirring a pot over a hot stove.