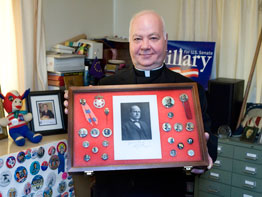 HAZEL PARK, Mich. – Father Bob Williams has a lot of reasons to love election season – about 25,000 of them, in fact.

Father Williams, pastor of St. Justin Parish in the Detroit suburb of Hazel Park and a judge with the Detroit archdiocesan metropolitan tribunal, has been collecting political campaign buttons for 38 years, amassing 25,000 in the process.

Starting at age 17, picking up a button here and there on various campaigns, he now buys, sells and trades them as he picks up duplicates and finds ones he has yet to add to his collection.

While many Americans might have gotten sick of hearing political ads wherever they turned before Election Day this year, Father Williams, a self-professed political junkie, revels in the nonstop coverage. “I love politics,” he said. “It mushroomed from there.”

Father Williams started collecting buttons in 1972, picking them up at various campaign headquarters. Although some collectors focus on one particular person, or one political party, he collects from both parties, all elections, winners and losers, although he does focus on governors, senators and members of Congress.

The priest is a member of the American Political Items Collectors, and goes to trade shows and conventions when he can.

He gets buttons from people he knows who find them when cleaning out the basement or attic, but he does a lot of his buying and selling on eBay, the online auction site.

He has seen some buttons online for thousands of dollars, and many for hundreds, but among his more expensive buttons is a $350 “Mayberry for Governor” pin, promoting the Democrat who lost the bid for Michigan’s top spot in 1900. He said he knew it existed but hadn’t seen it before he found it online, and snapped it up when he did.

“Sometimes it’s hard to find what you’re looking for,” he said in an interview with The Michigan Catholic, newspaper of the Detroit Archdiocese.

He finds that a lot of people who get involved in collecting political buttons are involved in campaigns or are history professors, political science teachers or history buffs, he said.

Father Williams worked on campaigns “way back,” he said, and has managed two – while in college, he managed the campaign for a candidate who was running for mayor, and as a priest, for a candidate for a University of Michigan board of regents spot. Both lost.