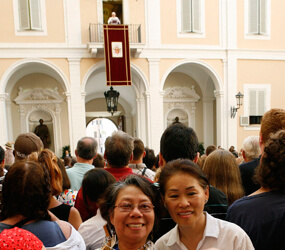 CASTEL GANDOLFO, Italy – Without well-prepared priests, “the new evangelization” of society will be just a slogan, Pope Benedict XVI said.

“Today we see a need for each priest to be a witness of the infinite mercy of God with a life completely conquered by Christ and for them to learn this from the very first years of their preparation in the seminary,” the pope said.

During his weekly general audience Aug. 19, the pope spoke about St. John Eudes, the 17th-century founder of the Eudists, a religious congregation dedicated to training diocesan priests. The French saint’s feast day is Aug. 19.

An estimated 3,000 people gathered in the courtyard of the papal villa at Castel Gandolfo for the audience. Archbishop Edwin F. O’Brien was seated in the front row.

Pope Benedict said the training of seminarians and priests is crucial for ensuring that “the new evangelization is not just an attractive slogan, but that it becomes a reality.”

A priesthood candidate’s time in the seminary, he said, must be like the time the disciples spent alone with Jesus after being called to follow him and before being sent out to preach the Gospel.

The pope said that, like today, the 17th-century in France, where St. John Eudes lived and ministered, was a time of great social, political and religious upheaval. “It was the time of the Thirty Years’ War, which devastated not only a large part of Central Europe, but it also devastated many souls,” he said.

Yet even as “contempt for the Christian faith was spreading,” he said, the Holy Spirit gave rise to a spiritual renewal with holy men and women, including St. John Eudes.

In the 16th century, the Council of Trent issued norms for the erection of diocesan seminaries and for priestly formation because the council members “were well-aware that an insufficient preparation of priests had an impact on the whole crisis of the Reformation; priests were not correctly prepared for the priesthood intellectually and spiritually,” he said.

St. John Eudes saw that the reform had not been instituted in France and he noted “the serious need for spiritual assistance people were experiencing precisely because of the inadequacy of a large portion of the clergy,” the pope said.

“The journey of holiness he followed and proposed to his followers had its foundation in placing trust only in the love God revealed to humanity in the priestly heart of Jesus and in the maternal heart of Mary,” he said.

Pope Benedict asked people to pray for priests and for seminarians, “that they may spiritually enter into the heart of Jesus, becoming men of true love, humility and patience, renewed in holiness and pastoral zeal.”

The text of the pope’s audience remarks in English are posted online at:
www.vatican.va/holy_father/benedict_xvi/audiences/2009/documents/hf_ben-xvi_aud_20090819_en.html.