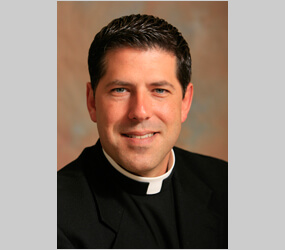 MIAMI – Archbishop John C. Favalora of Miami expressed disappointment May 28 at both Father Alberto Cutie’s decision to join the Episcopal Church and the public way he was received into his new church.

“This truly is a serious setback for ecumenical relations and cooperation” between the Catholic Archdiocese of Miami and the Episcopal Diocese of Southeast Florida, the archbishop said in a statement that also warned Catholics not to request the sacraments from Father Cutie nor attend Masses celebrated by him.

Father Cutie, who was suspended from his parish and Catholic radio posts after photos of him with a woman were released by a tabloid magazine, joined the Episcopal Church May 28 at a ceremony at Miami’s Trinity Cathedral. The woman, identified as Ruhama Buni Canellis, 35, also became an Episcopalian in the same ceremony.

“I have decided to become part of a new spiritual family within the umbrella of Christianity,” he said in a statement. “As I have been saying and writing for years through my work in communications, instead of focusing on our differences, let’s work together so that all may come to believe in a loving and good God, even in the midst of this changing world.”

A statement from the Episcopal Diocese of Southeast Florida said he would pursue becoming a priest in that church but it was not clear how long the process would take.

Archbishop Favalora said neither Father Cutie nor Episcopal Bishop Leo Frade of Southeast Florida had told him that the priest was considering joining the Episcopal Church.

“The Archdiocese of Miami has never made a public display when for doctrinal reasons Episcopal priests have joined the Catholic Church and sought ordination,” the archbishop said. “In fact, to do so would violate the principles of the Catholic Church governing ecumenical relations. I regret that Bishop Frade has not afforded me or the Catholic community the same courtesy and respect.”

Father Cutie said during a May 11 interview on CBS’ “The Early Show” that he has had a two-year romantic relationship with the woman shown in the photos published May 5 in the Spanish-language magazine TVNotas.

The Cuban-American priest, dubbed “Father Oprah” because of the advice he gave to couples on Spanish-language radio and television, had been administrator of St. Francis de Sales Parish in Miami Beach and general director and president of Pax Catholic Communications.

Archbishop Favalora directed part of his statement to the Catholic community.

Citing various sections of canon law, the archbishop said Father Cutie had separated himself “from the communion of the Roman Catholic Church by professing erroneous faith and morals and refusing submission to the Holy Father.” Any sacraments he performs “would be illicit” and any Mass he celebrates “would be valid but illicit, meaning it does not meet a Catholic’s obligation.”

The statement also noted that Father Cutie “is still bound by his promise to live a celibate life,” from which he can be released only by the pope.

In a May 28 statement published in English and Spanish on Father Cutie’s Web site, www.padrealberto.net, the priest asked people to respect his privacy and the privacy of his loved ones after his decision.

“There have been lies, innuendos, rumors and even hurtful actions by those seeking to profit from my life and struggles in this time of transition. I respectfully ask that all these things stop now,” he said.

He also said he would be “continuing the call to spread the message of God’s love and the vocation God gave me to priestly service.”

Father Cutie said his decision to join the Episcopal Church did not just begin a few weeks ago.

“I have searched my soul and sought after God’s guidance for a long time. I have also spoken to friends in and outside the Episcopal Church about their service to God and the many similarities that exist among the various branches of Christianity, which profess the Catholic faith,” he explained.

He emphasized that his own personal struggle “should in no way tarnish the commitment of so many brother priests who are celibate and faithful to their promise. I will always love and hold dear the Roman Catholic Church and all its members who are committed to their faith and have enriched my life.”

The Associated Press said the Father Cutie was expected to announce that he will marry his girlfriend; the Episcopal Church allows its priests to marry.

Father Cutie, whose name is pronounced koo-tee-AY, was born in Puerto Rico to Cuban parents and grew up in Miami. He was ordained in 1995; four years later he developed an international following with his television show, “Padre Alberto,” which was first broadcast on Telemundo.