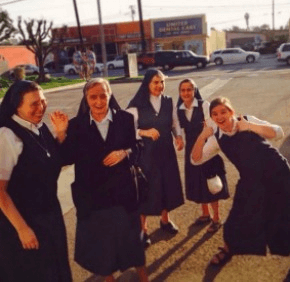 By Evan Ponton
As Twitter feuds and Snapchat scandals make headlines, have you heard of Baltimore’s own Franciscan friar-chaplain live tweeting his high school’s homecoming dance, or a young nun from Libertytown with a nationally recognized Instagram? Four gifted men and women religious throughout the Archdiocese of Baltimore recently shared about the joys and challenges of embracing social media as part of their vocations.
Friar Matt Foley, OFM Conv. – Joy Simply Stated
While chaperoning a homecoming dance, Father Matt Foley, Conventual Franciscan friar and chaplain of Archbishop Curley High School, began tweeting “just to pass the time.” He didn’t expect the response. Alumni and students began commenting and re-tweeting, some sharing happy memories and some making new ones. “Sharing this joy,” says Father Matt, “just comes naturally to the life and ministry of being a Franciscan.”

Twitter has its practical uses too. Franciscan Youth Ministry at Curley started using Twitter to keep students aware of events and deadlines. It even helps Father Matt plan his homilies! If his message can’t be summed up in a 140 character tweet, he works until it can.
In his own day, St. Francis told friars to keep their preaching “well chosen and in few words,” Father Matt says, since “the most profound and challenging messages are often the most simple.”
Follow Friar Matt on Twitter @frathermatt
Sister Chelsea Moxley Davis– “Following” Jesus
Have you ever considered St. Paul’s letters at Mass “social media”? The Daughters of St. Paul do, and they’re busy finding new ways to communicate St. Paul’s message to today’s world.
After a high school event, Chelsea, who grew up attending St. Peter’s in Libertytown, befriended the sisters on Facebook and was struck by how “normal” they were. She learned more about the unique charism of their founder Blessed James Alberione and decided to pursue a vocation.

Now a novice with the order, Sister Chelsea uses the hashtag #MediaNuns everywhere she goes “to give joyful, true, witness to what it means to be a follower of Jesus.” Her witness recently landed a spot on a nationally recognized ministry site as a top Catholic Instagrammer. For busy young people looking for meaning everywhere but church, Sister Chelsea thinks social media helps “transform into churches the places they do go.”
Follow Chelsea on Instagram @chelseaamfd and Twitter @Chelsea_Moxley
Father Austin Murphy– Finding Christ in Disney
While serving as pastor of St. Luke and Our Lady of Hope parishes in East Baltimore, Archdiocese of Baltimore priest Father Austin Murphy makes time to reach online readers with his blog “Jesus Goes to Disney World”. Connecting faith and movies comes easily, Father Austin says, because Catholicism “is so much an incarnate faith.”
It’s the “gray areas” often depicted in movies and television involving complex relationships and choices where “black and white categories are not always easily applied” that intrigue Father Austin. His passion has inspired parish Disney movie nights where area youth and adults gather to discuss themes of good, evil and redemption in movies like Frozen. As Father Austin sees it, even when the world today appears dark or too “secular,” Catholics can always find “something greater shining” in Christ by finding Christ in popular culture.
Father John Paul Walker, OP– Friendship on Campus
Since being founded in 1214, the Dominican Order of Preachers has always loved a challenge. As current Catholic chaplain of Johns Hopkins University, Dominican Father John Paul Walker sees a challenge facing young people now in the world of social media. Father Walker believes it is important to be present to students online since college life often includes “loneliness and confusion that unwittingly lures young people into substituting online friendships for real ones.”

But every challenge is an invitation to respond with truth, charity, along with typical Dominican intelligence and ingenuity. Father Walker now uses social media to publicize community-building events like their recent All Saint’s Day Vigil that drew over 130 young adults for their largest crowd ever. Even if it’s just passing on a good article, social media is just another tool Dominicans are using to offer clarity about each person’s purpose and call in the Church and world.
Are you a religious using social media? Share your account in the comments section.
Evan Ponton is a former seminarian who teaches senior theology at Archbishop Curley High School in Baltimore.
PrevNext