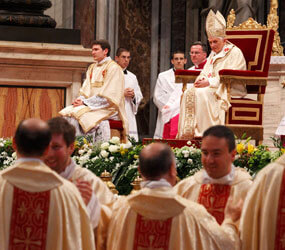 VATICAN CITY – A priest who seeks status rather than the will of God will be a slave to himself and to public opinion and will never discover how God wants to use his personal gifts and talents for the good of the church and the world, Pope Benedict XVI said.

Being ordained a priest requires “the courage to say ‘yes’ to the will of another,” knowing that God and the church will not erase his individuality, but will help him become all he can be, the pope said June 20, just before ordaining 14 new priests for the Diocese of Rome.

The 14 men, who studied at four different seminaries in the city, promised the pope their fidelity, expressed their desire to preach the Gospel and administer the sacraments and accepted celibacy as a way to consecrate themselves completely to God.

As the congregation invoked the assistance of all the saints, the men laid face down on a rug before the main altar in St. Peter’s Basilica. Then, one by one, they knelt before Pope Benedict as he placed his hands on their heads and ordained them to the priesthood.

“The priesthood can never represent a way to achieve security in life or to gain a position in society,” he said.

A man who sees the priesthood as a way to gain status obviously does not understand what it means to be a priest, but he also will never be free or happy, the pope said.

If status is what a priest is looking for, he said, “he will have to flatter; he will have to say things just to please people” and follow fads, “depriving himself of a life-giving relationship with the truth.”

The path of true discipleship, which includes taking up the cross, “is the sure path for finding true joy,” the pope said.

A large part of that joy comes from being able to celebrate the Eucharist, “holding in our hands the bread of heaven, the bread of God, who is Christ, the grain broken in order to be multiplied and to become the real food for the life of the world,” he said.

“It is something that cannot but fill us with deep awe, lively joy and immense gratitude,” the pope told the new priests.