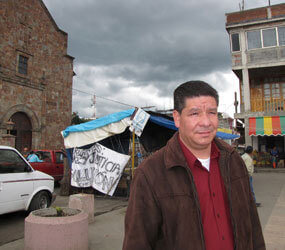 CHERAN, Mexico – Father Antonio Mora ministers to a town under siege, where masked men guard checkpoints leading into town, the charred remains of logging trucks block roads and a banner across from his parish in the town square demands a military presence.

Set in the misty hills of Michoacan state and surrounded by pine forests, Cheran is a place that loggers armed with chainsaws and assault weapons once clear-cut trees with impunity. The local mayor and police department were alleged to be in cahoots with the criminals, and community leaders were assassinated.

Then the local population lost patience when the loggers encroached on the town’s water source. Armed with two-by-fours, hatchets and bottle rockets, they chased off the loggers in mid-April and, later, the police department and the mayor.

The April 15 uprising failed to surprise Father Mora, although he and others in the community say the actions were spontaneous and unplanned.

“It was a response to the anger, rancor, helplessness and sense of abandonment by the authorities.”

The uprising in Cheran is one of the few grass-roots revolts against the growing reach of organized crime, whose illegal enterprises and bloody turf wars have claimed 40,000 since a government crackdown began in December 2006.

It also highlights the frustration with the failure of various levels of government to protect some communities against organized crime, which increasingly has moved in on small-time nuisances – such as logging without permits – and turned them into thriving illegal enterprises.

“I know people went knocking on the doors of the corresponding authorities, the forest authorities, and there’s been no response,” Father Mora said.

“The only thing the state government has done is wash their hands of this and pass along the problem to the federal government.”

Cheran unfolds across a hilly region 250 miles west of Mexico City, and many in the mostly indigenous Purepecha population of 14,000 depend on the forests for their livelihood.

A local “Combat Committee” now has teams manning checkpoints and patrolling the forests and has called for the military to intervene, but the main federal government response has been to send sacks of food and household basics.

“We don’t want them to militarize the town, rather patrol the areas with illegal logging,” said one leader, who, like many in Cheran, declined to provide his full name for fear of reprisals.

The situation in Cheran had deteriorated over the past three years to the point that locals recall animals left without natural habitat roaming the streets in search of food and truckloads of logs rolling through town with armed escorts in tow.

Taking up arms and blocking access to Cheran appears to have been a last resort. Father Mora expressed no opinions on the subject.

The uprising and locals taking matters into their own hands highlights the tricky situations parish priests and diocesan officials in conflictive regions of Mexico must face in carrying out their routine duties and social ministries.

Father Mora played no role in fomenting or arming the uprising, but ironically he has played a key role in sustaining it.

“He’s a pillar in the community,” said the leader during an interview in the former mayor’s office.

Before the uprising, Father Mora worked on reconciliation projects after a political feud tore the town apart during the 2007 local elections. As the logging problem worsened, he celebrated funeral Mass for those killed by the criminal groups protecting the loggers.

After the uprising, “People asked me to get weapons for them,” the priest recalled. But he mostly provided spiritual support for residents during an enormously tense time as the thugs – most likely from quasi-religious crime group La Familia Michoacana or a splinter organization, the Knights Templar – would threaten to return with guns blazing. The military and Federal Police never showed up.

Father Mora also focused on keeping needy residents fed by turning a parish office into a storeroom for food and making sure it was delivered, something necessary in a town where the economy has all but collapsed.

The Caritas chapter of the Diocese of Zamora has organized collections in parishes across the region. One recent day, a team of three Caritas workers brought potatoes and onions; on other trips it was cooking oil and sacks of rice and beans.

The state chapter of the teachers’ union and the federal Social Development Secretariat have donated food and supplies, too, which Father Mora has been responsible for delivering.

Despite the tension in Cheran, Father Mora has seen positive signs and some return to normalcy. He performed six weddings on a recent Saturday, for example.

Young people have started painting homes in the town with a tasteful white-and-rust color scheme, covering over graffiti and old political propaganda. The dozens of bonfires lit nightly in neighborhoods as an act of vigilance has brought residents together, helping overcome the past political conflicts.

People are united, he said. “Even the Protestants come to pray with us.”