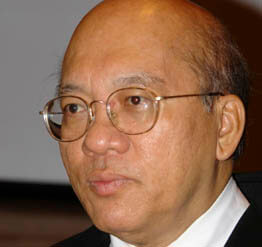 BERKELEY, Calif. – The future of the Catholic Church as a global force depends on shared power and mutual respect between the church’s historic center in Western Europe and its fast-expanding population base in the Southern Hemisphere, Georgetown University theologian Father Peter Phan told an audience in Berkeley Oct. 6.

Father Phan, who brings an Asian cultural perspective to Catholic thought, described the growth of Catholicism in the developing world and the importance of local culture among people embracing the Catholic faith in Africa and Asia.

He was the keynote speaker at an international conference sponsored by the Franciscan School of Theology. The Oct. 6-7 event focused on how globalization is changing the church and what the church can do to change with it.

Father Phan said he is advocating mutuality, not conflict.

Vatican officials are examining a book written by the Vietnamese-American priest for possible ambiguities on the unique role of the Catholic Church in the framework of religious pluralism. The book, titled “Being Religious Interreligiously: Asian Perspectives on Interfaith Dialogue,” was published in 2004 by Orbis.

In an interview after his talk with Catholic San Francisco, the archdiocesan newspaper, Father Phan he said is not challenging the church’s core principles of papal primacy and papal infallibility, but he declined to discuss his troubles with the Vatican.

According to a Sept. 12 story by the National Catholic Reporter, the central issues of concern included what the Vatican Congregation for the Doctrine of the Faith considers the book’s unclear descriptions on Christ’s role as universal savior, the function of the Catholic Church in salvation and the value of non-Christian religions.

In his address Father Phan said the Roman Curia, the church’s central administrative offices, should resist fighting the trend of globalization. It must share ecclesiastical authority with bishops on the periphery and embrace their non-European roots as vital to the church’s global mission, he said.

“Power relations cannot be ignored in global Christianity simply because we say we are a religious institution,” Father Phan said. “The task is to try to make the voices of the global South heard by the ecclesiastical core.”

The church must be a “house of love rather than a house of fear” and the West must not impose its cultural norms on the East, said Father Phan, the first non-Anglo to be elected president of the Catholic Theological Society of America. He served from 2001 to 2002.

A former Salesian and now a priest of the Dallas Diocese, Father Phan holds the Ellacuria chair of Catholic social thought in the theology department at Georgetown.

Father Phan, who grew up in Vietnam and arrived in the United States in 1975 as a refugee, offered his model for a global church that is accountable to its culturally disparate faithful.

The theologian challenged the notion of a unified Christendom, calling the idea an example of Eurocentric ideology.

“I reject this,” Father Phan said. “Positively, we say ‘Christianities’ – plural. In fact, in the first seven centuries the most successful fields of mission were not Europe but Asia and Africa, with Syria as the epicenter.

“And the most vibrant intellectual centers were located not in the Western part of the Roman Empire but in West Asian and African cities,” he said. “Until the seventh century there was more Christianity in the East than in Rome. Rome was a backwater.”

When people talk about the legacy of the early church, “we always talk about Latin and Greek,” he said. “Please, look at the other side. There’s a whole Christian theological and liturgical heritage that usually disappears from the pages of church history books.”

He noted that Asian bishops do not enjoy conducting business in Italian and providing economic reports to Rome. They are more comfortable conferring in their own language over tea and measuring their success as ministers by their own norms.

Father Phan offered the social structure of early Christianity as a model for a global church in the 21st century.

By 2050, Father Phan said, 80 percent of the world’s three billion Christians will live in the Southern Hemisphere.

“By that time a white Christian is an oxymoron,” he said. “That is a shock. Wake up; this is the reality you cannot avoid.”

The church should respond by building a new pluralistic social compact on the foundation of a century of modern church teachings on human dignity, the preference for the poor in the exercise of Christian charity, justice, human rights, international relations and the environment, Father Phan said.

At the heart of the social compact must be a more open-ended view of ecclesiastical authority, he said.

“In globalization,” he said, “stratification has shifted to function. It doesn’t matter who you are, whether you are ordained or not ordained. It doesn’t matter. The question is, ‘Can you do (it) and do it well?’“