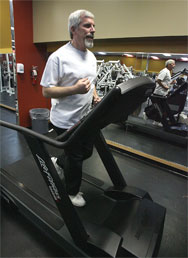 As Father James P. Kiesel walks into the Gold’s Gym in east Towson, the staff members call him by name and offer encouragement for his tri-weekly workout.

“Looking good, Father Jim,” one of the men says as the 51-year-old pastor of St. Dominic, Hamilton, heads toward the cardio-exercise equipment. “Keep up the good work.”

The compliment illustrates the transformation of Father Kiesel’s body in the past few years since he began making the time for a regular workout regime. The habitual exercise has also boosted his spiritual well-being.

When the St. Dominic pastor participated in a voluntary archdiocesan parish leadership analysis two years ago, his assigned coach interviewed the church council, parishioners and staff who all championed his management style, but raised concerns about his health.

“It was a wake-up call for me,” Father Kiesel said. “I certainly was aware that I was out of shape, but hearing the concerns from the people around me drove home the point.”

Within a few weeks the priest joined Gold’s Gym and developed a work-out program.

The first month was painful and discouraging as he huffed and puffed through his gym visits.

But over time the workouts progressed from tolerable to downright enjoyable, Father Kiesel said.

Now 40 pounds lighter than when he began pumping iron, the pastor has gained more than muscle tone to complement his 6-foot-1-inch frame. He’s achieved stronger concentration skills and a deeper connection with God.

“My blood pressure is down, and I’m stronger physically, psychologically, emotionally and spiritually,” Father Kiesel said. “When I’m exercising I feel one with God. It’s been a great stress reliever from the rigors of being a priest, and I believe it’s helped me become a better pastor and minister.”

Archbishop Edwin F. O’Brien acknowledges that sometimes priests don’t take care of themselves as they should.

“We should remind our priests to take the time for relaxation and physical exercise,” Archbishop O’Brien said. “It’s very important for their health and their ministry.”

A sound mind, body and soul will only enhance a priest’s performance when ministering to his flock, he said.

With perspiration dripping from Father Kiesel’s brow as he runs on the gym’s treadmill, the priest says he looks forward to exercising all day.

“I feel the energy flowing through my body,” he said. “I love the burn I feel in my muscles as I’m lifting weights. It’s therapeutic. When I finish, I feel so uplifted. This has improved my life so much.”