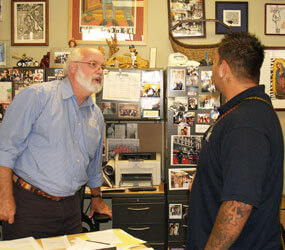 LOS ANGELES – Both the city and the county of Los Angeles will suffer if a nationally acclaimed gang-intervention program has to shut down, even temporarily, said the Jesuit priest who founded the program more than two decades ago.

Homeboy Industries, whose motto is “Nothing stops a bullet like a job,” dodged its own bullet of meeting the next payroll when the City Council voted Aug. 14 to negotiate a $340,000 contract with the organization, paying for it with money from a U.S. Justice Department gang-reduction grant.

“Homeboy is really a consequential place,” Jesuit Father Greg Boyle, who started Jobs for a Future in 1988 that morphed into Homeboy Industries, told The Tidings, Los Angeles archdiocesan newspaper. “There are 12,000 folks who walk through our doors here during the year – 8,000 gang members.

“There’s no place like it on the planet, and we’ve been around for 22 years,” he added. “Since 1992 we’ve been offering wraparound services, and it’s made a difference. Gang-related homicides have decreased steadily since then, and we’re one of the essential reasons for that. A lot of other places do parts of what we do in terms of comprehensive services, but we do it in a way that’s kind of writ large.”

He described the Homeboy headquarters as “a symbol as much as it is a place where you can locate concrete help. So it would be of great consequence if we had to padlock those front doors even for a time.”

The 55-year-old priest said Homeboy Industries serves as a steam-release valve on LA’s gang pressure cooker, by being a place where active gang members along with others getting out of prison who want to redirect their lives have a place to hang.

So what exactly is the current state of Homeboy Industries?

“We’re just living from payroll to payroll,” said Father Boyle. “It’s a terrible way to live. Mainly it’s the recession. We built a new place and moved about two years ago, and now we run a program that’s commensurate with this bigger place. But to do that, you know, tripled our payroll to about $300,000 every two weeks or $9.5 million every year.”

Then he ticked off the different programs that generate $3 million annually: Homeboy Bakery, Homegirl Café, Homeboy Silk Screen, Homeboy Maintenance, Homeboy Merchandise and, the latest enterprise, Homeboy Solar Panel Installers. But all are training programs and not profit-making businesses, he said, and every month some 350 trainees need to be paid.

About 40 percent of Homeboy’s funding comes from foundations. “But that has sort of evaporated,” he said. “Everybody says ‘not this year’ and a lot are even saying ‘not next year.’ So that’s a tough one.”

Most of the rest is raised from individual donors and targeted fundraising, which have also fallen off significantly. Occasionally, a grant from the government will augment some program or project. But what Homeboy Industries really needs, he said, is for somebody to endow the organization with steady cash flow.

Father Boyle is not a fan of Mayor Antonio Villaraigosa’s new Gang Reduction and Youth Development program, which started last spring and focuses on a dozen gang-reduction zones. A key element of the program is street intervention, where workers rush out to gang shooting scenes to do rumor control and try to stop retaliatory acts of violence.

“It’s buying into a gang-intervention model which I think is probably not good,” he said. “I think it keeps gangs alive. It provides them with oxygen. It says, ‘Gangs will always be with us, so we might as well get them to get along together.’“

Such an attitude has the “huge unintended consequence” of saying “your gang is a stakeholder like anybody else in the community – the church, the boys’ and girls’ clubs,” he added. “Now, what’s wrong with this picture? Gangs are not stakeholders. And anybody who says that doesn’t speak for my community.”

“People always raise the question, ‘My God, you’re against violence interruption!’” he said. “I take the longer view. I think the community could have been empowered to say to gang members: ‘We love you. We will refuse to demonize you, and there’s not a single good thing in your gang.’

“At Homeboy we do not work with gangs; we work with gang members,” he added. “And so you come here, we’ll help you start your life. We have no interest in saying, ‘Can we get these two gangs to get along?’ I’m sort of the lone voice on this. But I’m not going to say something that I think is unsophisticated.”