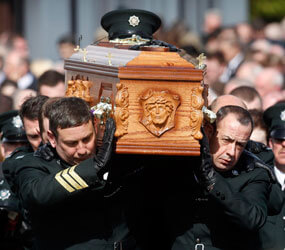 The Real IRA – an Irish Republican Army splinter group that opposes the region’s peace process – warned that the church would be unable to protect Catholic members of the police, whom the paramilitaries branded “traitors.” It comes just three weeks after a Catholic member of the Police Service of Northern Ireland was killed in a terror attack.

In a statement read by a masked man dressed in military fatigues and flanked by other paramilitaries in Londonderry April 25, the group warned, “Those who think they are serving their community are in fact serving the (British) occupation and will be treated as such.

“They are as liable for execution as anyone, regardless of their religion, cultural background or motivation,” the statement said.

Father Michael Canny, administrator of St. Eugene’s Cathedral in Londonderry, said he would like to meet the group to ask its members to “reflect on what you are offering to your own family, to your own friends and to your own supporters.”

“So, you are offering darkness and despair and misery to your own people,” he said.

Ronan Kerr, 25, lost his life when a booby-trap bomb exploded under his car in Omagh April 2. His murder brought widespread condemnation and his mother, Nuala Kerr, urged other young Catholics to continue the work of creating a more equal police service.

“This is at a time when we are striving for a neutral police force for the good of our country and I urge all Catholic members not to be deterred by this. We all need to stand up and be counted and to strive for equality,” she said.

For decades, Catholic church and political leaders refused to support the police in Northern Ireland amid claims of discrimination and intimidation. However, after a swathe of reforms brought about by the 1998 Good Friday Agreement, the hierarchy agreed in 2001 to encourage young Catholics to join the force. Since then, largely due to a special 50-50 Catholic-Protestant recruitment policy, the number of Catholic police officers has risen from just a few percent to almost 30 percent.

The Real IRA was formed by former paramilitary members who refused to sign the peace deal that committed all sides to pursue their goals by purely peaceful means. The group insists that nothing short of a full British withdrawal from Northern Ireland will suffice, while mainstream former paramilitaries have embraced the democratic process to fulfill their ambition of a single united Ireland encompassing Northern Ireland and the Irish Republic.