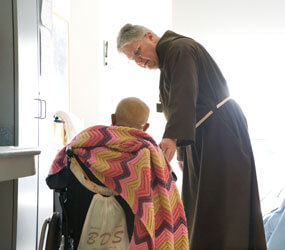 PALO ALTO, Calif. – To watch Capuchin Father James Stump at work is to see a Christ-centered “ministry of presence” in action as a daily routine.

A chaplain at the Department of Veterans Affairs hospital in Palo Alto, Father Stump makes his rounds with one purpose in mind: to invite sick and wounded veterans to encounter the living Christ.

Father Stump is quick in his step and quick with a joke as he goes about his work.

Accompanied by a reporter on one of his recent rounds, he joked to a Marine on the move down the hallway in a wheelchair to “watch the speed limit.” They chatted about the Marine’s spinal reconstruction surgery. But in a moment, without a break in the informality, the priest prayed over the patient and asked that Jesus “show his face to you, have mercy on you.”

And as the two parted, the priest simply said: “Heal up.”

Father Stump does all he can to put the veterans at ease and in a good mood. He creates an environment where Christ’s presence can become a part of almost any encounter he initiates.

“Just the way we enter a room is important: being a little upbeat, wanting to be there,” Father Stump told Catholic San Francisco, the archdiocesan newspaper.

The Kansas-born Father Stump came to the priesthood late in life. He was a corporate lawyer until he was about 40 years old. He yearned for more meaningful work, gravitated toward the priesthood and joined the Capuchin community at St. Francis Friary in Burlingame.

The Capuchins assigned Father Stump to the VA chaplaincy to succeed an older priest. He wasn’t sure how he would take to hospital work, but it would turn out to be an opportunity that opened up his gift for one-on-one encounters.

“If that’s a gift, it’s a gift of the Spirit,” Father Stump said. “I feel at ease. … I just feel very comfortable being a priest.”

Hospital chaplaincy is a ministry that could easily become as heavy as the illness and death that surround it. But Father Stump strives to be consistently open and welcoming.

“I sometimes pray that the angels and saints go before me to take care of any problem,” he said.

Father Stump is a member of the VA Palo Alto Health Care System’s interfaith chaplaincy team, which includes other Catholic chaplains and is supported by many volunteers, some of whom serve as extraordinary ministers of holy Communion.

“It’s a great group of folks who are very cohesive, who make people like me feel welcome and warm,” said Paul Jordan, a patient in the hospital’s center for the blind.

Father Stump’s daily role includes celebrating Mass in the hospital chapel. After Mass, he sets out to greet patients in hospice and intensive care wards, working from a list of Catholic patients.

When he finds a door open at a Catholic patient’s room, he announces his presence. If he is invited in, he is prepared to offer whatever the patient might be looking for, including prayer and the sacraments of Eucharist and the anointing of the sick – which are at the heart of his ministry.

Father Stump has met many inspirational people through his ministry, but perhaps none more than Gregory Peters, an high school All-American football player who was drafted to serve in Vietnam and led a combat squad.

“He was captured twice, and he escaped one time and another time he was rescued,” Father Stump said. “He had this mantra prayer when he was being beaten, ‘Be still and know that I am God.’ We had a banner made and put in our chapel because of that.”

Peters spent much of the rest of his life in and out of the VA hospital.

“He always wanted to get better, well enough to help around the chapel,” Father Stump said. “He’d (roll) his wheelchair over from the nursing unit to the chapel. He was always close to the Lord and had a great love of the Eucharist and the Mass.”

The wounded soldier was instrumental in his roommate’s conversion to Catholicism, Father Stump said.

“You just think about your little trials and tribulations you go through during the day and what somebody like him went through,” he said. “He maintained this great faith in God and love of the Eucharist. It kind of gives you inspiration.”