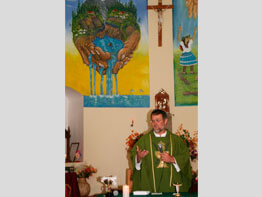 PAMPAROMAS, Peru – Father David Johnson viewed the barren mountains towering over his parish with a mixture of sadness, frustration and hope.

The sadness came from knowing that the farm families in St. James the Apostle Parish depend on the land for their livelihood. The patchwork of green fields in the lower part of Nepena Valley, in the central Peruvian Andes, ends abruptly where the irrigation canals stop. The lack of water makes it difficult for farmers to provide for their families year-round, especially during the dry season from May to September.

The frustration was because the steep, brown mountainsides could be green. They still bear traces of ancient terraces where the ancestors of the valley’s residents farmed long before the Spanish conquest, using water high in the peaks from a network of 42 lagoons that they dammed and channeled.

Many of those early public works were destroyed in colonial times by large landowners in the lowlands who were greedy for water or mine owners who wanted to force indigenous farmers off their lands and into the mines.

But the energetic Canadian priest is convinced that the land can be fruitful again, and bringing life-giving water back to the valley has become the cornerstone of his parish’s ministry.

“The church brings people to encounter Jesus but that’s only one part,” he said. “The other part is for Jesus to enter into people’s lives. Rebuilding the lagoons, ensuring that people have water, that’s one way that Jesus enters their lives.”

This was not the vision he had as a student in the Benedictine Christ the King Seminary near Vancouver, British Columbia, in the late 1980s. A book about Blessed Mother Teresa of Calcutta awakened his call to mission, but he decided he was not called to a religious order. He wanted to be a diocesan priest, rooted in a local community.

In 1990, he traveled to Peru, landing on the doorstep of a home run by Mother Teresa’s Missionaries of Charity in a rough and gritty neighborhood near downtown Lima. The bishop of Chimbote, a fishing port north of Lima, invited him to finish his seminary training there, and in 1994 he was ordained a diocesan priest. A year later, he moved to Pamparomas, a cluster of houses in a steep valley 8,800 feet above sea level.

“You come here to learn,” he said.

When drought jeopardized his parishioners’ livelihood, he began exploring the valley’s water sources, learning about the lagoons and the people who built them, as well as pre-Hispanic houses and temples that archaeologists are now excavating.

“The ancient people had a very sophisticated system for managing water,” said Father Johnson, who hopes that system will one day flow again.

Farmers and local government officials are rebuilding some dams and channels. Besides budget limitations and distance, the watershed also is threatened by pollution from an illegal mine on a remote, barren hillside more than 14,000 feet above sea level. Many of the lagoons are a day’s walk or more from the villages, high above the tree line where there are no roads.

Father Johnson, who helped start a farm development committee in Pamparomas and has worked with government officials in the Nepena watershed’s five districts to draft a joint development plan, worries the pollution could set back those efforts.

Here in the high Andes, where water is scarce and the climate is harsh, faith and farming are intertwined closely.

Two years ago, Ricardo Reduciendo Milla, 30, completed catechist training through a parish program funded by the U.S. Conference of Catholic Bishops. Because Father Johnson can reach some of the parish’s 42 far-flung villages only once a year, catechists lead their neighbors in the Sunday Liturgy of the Word and prepare them for sacraments.