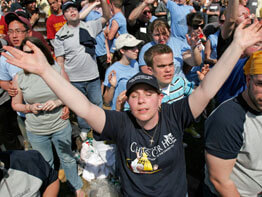 SAN ANTONIO – Every diocese needs a comprehensive pastoral plan specifically aimed at young adults to reverse the hemorrhage of Catholics in their 20s and early 30s leaving the Catholic Church, a national pioneer in young adult ministry said.

Father John Cusick, director of young adult ministry for the Archdiocese of Chicago and the father of the Theology on Tap program, said the church needs a savvy “new apologetics” and “satellite sites” away from the parish grounds where young adults can gather to form quality relationships without feeling pressure from the church.

Addressing a youth ministry symposium in April at the Oblate School of Theology in San Antonio, Father Cusick cited a recent USA Today poll indicating that 10 percent of Americans are former Catholics and said the percentage is much higher among people in their 20s and early 30s.

“If Catholic youth ministry is so good, where are all the young adults? They’re missing in action,” he said. “For the moment (in their teens), they have a good sense of church, but then they fall off the end of the table.”

When they come back temporarily for such events as baptisms and marriages or seek out the church in times of serious illness, death or life-changing decisions, Father Cusick said, the church needs to celebrate such moments of return rather than scold young adults for having stayed away.

Meeting the liturgical needs of today’s young adults will require parishes to improve the quality of preaching, hospitality and music, he said.

“Don’t say, ‘As we read in today’s Gospel.’ I heard it the first time. Tell me how it works in my life. Young adults hunger for a Gospel that works for them on Monday morning when they go to work,” the priest declared.

Although young adult Catholics hunger for the Gospel, they are cynical about the institutional church, Father Cusick said. Often, they drop their children off for religious education classes but act as if they themselves would get a social disease if they walked into the church, he said.

Many young adult Catholics have problems with official teachings on marriage and women’s issues and official attitudes toward gays and lesbians, he added. They have gay and lesbian friends or co-workers, and they see the church as being anti-gay. They have difficulty integrating that with church teachings on loving one another, Father Cusick said.

“Satellite” sites for young adults would tap into the hunger 20- and 30-year-olds have for quality relationships, he said.

“One reason relationships are hard for them is that so many of their parents are divorced. I had a wedding where there were eight parents. Each of the four biological parents had been remarried. You have to know who is talking with whom and so on. I felt like I should have been a relational cop with a whistle and a nightstick,” he said with a laugh.

“It’s such a huge issue. When you’re dealing with fundamental issues of housing and jobs, there’s just no time for these other kinds of issues like relationships and spirituality.”

A “new apologetics” for young adults will require parish ministry leaders to learn the language of young adults and use the media that they use, Father Cusick said. He cited two successful Catholic Web sites targeting young adults – his own, www.yamchicago.com, and www.bustedhalo.com.

Debbie Gray, a youth minister at Holy Trinity Parish, said Father Cusick’s implied criticism of youth ministry was “a slap in the face,” but was unquestionably accurate.

“What he gave us wasn’t just a lot of book knowledge; he’s been out in the trenches with young adults for 31 years, and he knows what he’s talking about,” she said.