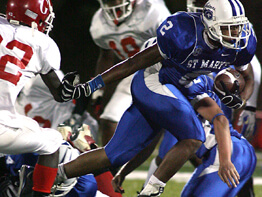 As of Oct. 15, the St. Mary’s High School Saints and two-time defending champions from Archbishop Spalding High School, Severn, are sharing identical conference records in football as both clubs are undefeated at 4-0 in the MIAA B Conference.

The Saints will face the Cavs on Oct. 26 at home on their new turf field.

For head coach Mike Clay and his 30-man roster, the Saints took it on the chin to open their season with a 36-0 out-of-conference loss to A Conference powerhouse Gilman, but bounced right back to force three straight wins, scoring 50 points and more in each of those contests.

Clay has been with the Saints’ program for the past three seasons as the program keeps improving. “I think we have sped up the five-year plan,” said Clay, referring to his initial timeline of bringing a contender’s football program to the Annapolis school.

With only 240 boys enrolled in the high school it’s been tough, but bringing up younger players has made all the difference as Clay is carrying eight sophomores and one freshman this year. A key for the Saints has been Clay’s commitment to having his players stay fresh by only playing offense or defense. While several other conference programs have players stay on the field for both offense and defense, Clay keeps his team fresh, hydrated and ready to go.

The team is led by senior running back Dontra Peters. Peters has 95 carries to date for 1,005 yards and 13 touchdowns. Peters’ staunch performance has him leading Anne Arundel County and the MIAA stat column in rushing.

“Peters is all about attitude,” said Clay. “He never stops. He maintains the thought that he will always score on every carry and that’s what has made him so successful.”

At quarterback for the Saints is junior transfer Peter Athens. Clay said that Athens has a great awareness in the pocket, throwing just shy of 950 yards for nine touchdowns. Athens has connected with sophomore wide receiver Mark McNeill for seven scores, 25 catches and 600 yards thus far.

On defense the Saints have been pleased with the performance of senior Marlon Johnson. Johnson is a force to be reckoned with at 6-foot-4, 250 pounds, and he leads the team with 55 tackles and nine sacks.

Clay is clearly committed to the program and the school. In fact, on Oct. 12, the day of the Saints’ homecoming game against The Cardinal Gibbons School, Baltimore, Clay started his morning attending a breakfast with his players’ mothers as a chance to connect.

Then, before the early evening game got underway, Clay connected with his players as they celebrated the liturgy with Father John Kingsbury, C.Ss.R., pastor of St. Mary in Annapolis. From there, Clay had another chance to connect at a team dinner. The Saints went on to defeat the Cardinal Gibbons Crusaders 20-7.

It’s this commitment to players, parents, the school and church community that has fueled a passion and pride.

“I come from a faith-based environment, and I have come up through youth sports programs,” said Clay. “I know what’s important to kids and that’s to remember that it’s all about relationships.”