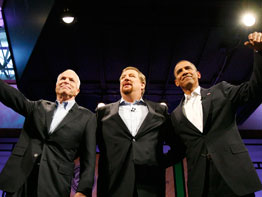 LAKE FOREST, Calif. – The presumptive presidential nominees of the nation’s two major political parties Aug. 16 tried to define themselves in religious terms on topics ranging from their personal moral failings to how to deal with climate change during a televised forum from Saddleback Church in Lake Forest.

The Rev. Rick Warren, author of the best-selling “The Purpose-Driven Life,” questioned Sen. John McCain, R-Ariz., and Sen. Barack Obama, D-Ill., separately for an hour each in a nationally broadcast session held in the sanctuary of the 20,000-member evangelical church Warren founded.

He posed nearly identical questions to each senator, starting with queries about whose advice they value and what some of their personal moral failings have been and how the nation has failed morally.

With Sen. McCain offstage in a room where he couldn’t hear the interview, Sen. Obama spoke first, saying he thought “America’s greatest moral failure in my lifetime” has been not following Jesus’ call in Matthew of “whatever you do for the least of my brothers, you do for me.”

“That basic principle applies to poverty,” Sen. Obama said. “It applies to racism and sexism … and (to) not having, … not thinking about providing ladders of opportunity for people to get into the middle class. There is a pervasive sense, I think, that this country is wealthy and powerful but we still don’t spend enough time thinking about ‘the least of these.’”

Sen. McCain’s answer to the same question was similar, though not framed with the Scripture reference.

“Perhaps we have not devoted ourselves to causes greater than our self-interest, although we’ve been the best at it (self-interest) of anybody in the world,” Sen. McCain said.

Sen. McCain said he thought after the terrorist attacks of 2001 the American people should not have been told to go shopping or to travel, but to join the Peace Corps, Americorps or the military and to expand the work the United States is doing to improve life for people in other parts of the world.

Sen. McCain said the failure of his first marriage was his personal greatest moral failing. He did not elaborate.

Sen. Obama attributed difficult times in his youth when he experimented with drugs and drinking as personal moral failings.

He said he has traced his problems in those days to “a certain selfish necessity on my part.”

“I was so obsessed with me and the reason I might be dissatisfied that I couldn’t focus on other people,” he said. “The process for me of growing up was to realize it’s not about me.”

Even at this point in his life, he said, “when I find myself taking the wrong step I think a lot of the time it’s because I’m trying to protect myself instead of trying to do God’s work.”

Rev. Warren asked Sen. Obama to explain his views about abortion, specifically “at what point does a baby get human rights, in your view.”

Sen. Obama said the answer depends on “whether you are looking at it from a theological perspective or a scientific perspective,” and that the answer is “above my pay grade.”

Sen. Obama has voted in the Senate and in the Illinois Legislature to oppose restrictions on abortion. He said he supports Roe v. Wade, the Supreme Court ruling that made nearly all abortions legal nationwide.

But he said anyone who “tries to deny the moral difficulties and gravity of the abortion issue I think is not paying attention.”

“I don’t think women make these decisions casually,” he said, but after wrestling with the questions with their pastors, husbands, doctors and family members.

Sen. Obama acknowledged that opponents of abortion consider inadequate his objections to bills intended to prohibit the procedure known as partial-birth abortion unless they include provisions to permit such abortions if the mother’s health is at risk.

He said his goal would be to find common ground with abortion opponents to reduce the number of abortions. “If you believe that life begins at conception … and you are consistent in that belief, then I can’t argue with you on that, because that is a core issue of faith for you. What I can do is say there are ways that we can work together to reduce the number of unwanted pregnancies.”

McCain, who opposes legal abortion, was succinct in answering the question about when he believes a fetus deserves legal protection.

“At the moment of conception,” he said. “I will be a pro-life president and this presidency will have pro-life policies. That’s my commitment.”