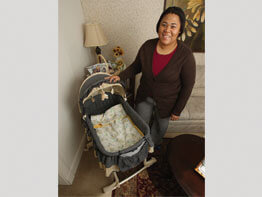 Abort the baby in your womb, her father told her, or move out of my house.

Her father’s ultimatum only strengthened the resolve of Rebecca.

“I can’t have him ordering me to kill my unborn child or get out,” she said. “I honestly thought I just might as well kill myself before having an abortion.”

But where to turn?

And where to live?

At 24, Rebecca knew she couldn’t stay with her parents in her childhood home in the Severna Park area, and her department store job didn’t pay enough to afford much rent.

After a few weeks spent on a friend’s couch and at the home of the vacationing pastor of her church, she dialed a toll-free number for the Gabriel Network and found a place in Annapolis for herself and her unborn baby.

In June, Rebecca, who asked that her last name be withheld, moved into the two-story, wood-frame cottage on a quiet street. There, she lives with the house director, Natasha Miller, who combines the best qualities of a coach, mentor and big sister.

(Another pregnant woman recently moved out of the house, where up to three pregnant women live at a time.)

Rebecca, an animated young woman quick with a smile, sits on a tan love seat that matches the couch in a cozy living room with a small TV and bookcase.

She knows now that it’s a boy kicking inside her stomach. It still pains her to think what she’ll do in a few months, but Becky, a Lutheran, has no doubt that God has guided her in her decision and that her faith will help sustain her when she gives her first-born child to his adoptive family.

“I almost couldn’t bear the thought that I couldn’t raise my own child,” she said. “It was very difficult for me to come to terms with the fact that I might not be the one to raise the baby.”

She realized, though, that she would have had great difficulty raising the boy as a single mother – the father, she said, has abandoned her and his baby – and wanted the child to have a stable family with the means to support him.

For Rebecca, finding the right adoptive family proved arduous: She interviewed no fewer than nine couples before settling on a Maryland husband and wife. Rebecca interviewed the parents for two hours and liked the way they interacted with their young daughter.

It’s an open adoption, meaning the birth mother has contact with her child. Rebecca’s adoption contract stipulates that she will be able to see her son at least annually and that the couple send photos and letters every four months.

Ms. Miller, who had been a caseworker for youths whose parents were incarcerated, became a house mother in 2007.

“When we tell a woman not to have an abortion, we really have to support her in the process,” Ms. Miller said.

Legions of volunteers make the network function, and it receives no government money, she said.

“If not for people being the hands and feet of Christ,” she added, “there would be no Gabriel Network.”

The house has given Rebecca a new chance. She has taken a few courses at Anne Arundel Community College and plans to earn a bachelor’s degree. Someday, she hopes to get married and have a family.

When she does, she says, she’ll love her children even before they’re born.

The Gabriel Network helps about 600 pregnant women a year, most of them through material assistance such as maternity clothes or diapers and baby items, transportation to doctor’s appointments, counseling, pastoral care, scholarships and referrals to government resources. The network offers transitional maternity housing at its four Maryland Gabriel Houses. It receives support from the Archdiocese of Baltimore, dozens of churches (many of them Catholic), individual donors and grants from foundations. Some 200 volunteers participate in the network. To learn more, donate or volunteer, contact the Gabriel Network at 1-800-ANGELOK (1-800-264-3565), gabrielnetwork.org or P.O. Box 2116, Bowie, Md., 20718.