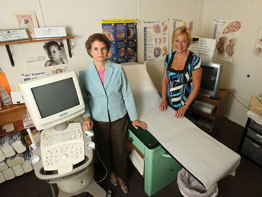 The Respect Life campaign is waged on multiple fronts.

Sidewalk counselors, prayer chains and the rapidly growing 40 Days for Life movement make a public stand against abortion and its practitioners.

Less visible but just as vital, meanwhile, are those who give time and energy to pregnancy centers, where expectant mothers receive support ranging from diapers and formula to sonograms and a spiritual component.

The Pregnancy Center West Medical Clinic, which provides alternatives to abortion and assists women experiencing crisis pregnancies, is one of dozens of such sites in the Archdiocese of Baltimore. Founded in 1984, the nonprofit clinic is nonsectarian, but several west-side parishes pad its roster of employees and volunteers.

Irene Egan began there as a volunteer counselor in 1986, when she married a Baltimorean, settled in Catonsville and was inspired by a neighbor to become involved in the pro-life movement.

Mrs. Egan became a part-time employee in 1987, joined the board of directors and is now the full-time managing director of the center on Frederick Road, just inside the Baltimore Beltway.

Her volunteers include a fellow parishioner of St. Agnes in Catonsville, Maureen Kirby-Smith, who traces her pro-life motivation to her faith and her profession, as a probation officer in Baltimore City.

“I was raised Catholic, I knew right from wrong,” Mrs. Kirby-Smith said, “but I did nothing about fighting abortion until an investigation into one of my cases. It was a drug case, and an abortion that she was forced into by her boyfriend had devastated her.

“God blessed me with beautiful children,” added Mrs. Kirby-Smith, who has sent all four of her daughters to her prep alma mater, Mount de Sales Academy, “and I needed to give something back.”

She began sidewalk counseling in 1991, advising women who were entering an abortion clinic on U.S. Route 40.

“I was scared to death,” she said, “but the second client I talked to was with her boyfriend. She said ‘I’m unsure of this, thank God you’re here.’ I used to go there every Friday.”

In 1995 she began giving time at the Pregnancy Center West, where the volunteers include Dr. Victoria E. Steiner-Larsen, the medical director, two ultrasound technicians and nine registered nurses. The male presence includes several members of the Knights of Columbus.

Its mission is enhanced by faith and technology, as a grant from the Cardinal’s Lenten Appeal allowed the center to purchase a new ultrasound machine earlier this year. Viewing a color sonogram can be a pivotal moment.

“A lot of women don’t understand that the heart is already beating at five weeks – that can be picked up on ultrasound,” Mrs. Egan said. “When they view the fetus, it becomes real to them, that they are carrying a human being.”

Mrs. Kirby-Smith recalls the sonogram’s effect on one couple.

“One girl knew she was pregnant,” she said. “When her boyfriend saw the baby on the sonogram, his face lit up. She said that ‘he very rarely smiles.’ He did that day.”

The Pregnancy Center West Medical Clinic served more than 250 clients in 2007. Donations of car seats and cribs are welcome, as is monthly support from St. Agnes.

“This was all happening before I came here six years ago,” said Father Carl F. Cummings, the pastor of St. Agnes. “We provide a donation every month, but we pray for Respect Life every Sunday, and from our perspective, they’re a wonderful example that we can point to.”

Archbishop Edwin F. O’Brien planned a Sept. 30 visit to the Center for Pregnancy Concerns on St. Paul Street in Baltimore. On the evening of Oct. 2, it was to honor the archbishop with its Prolife Advocate Award.