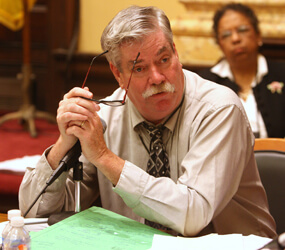 A bill that Catholic leaders say harasses pro-life pregnancy centers is heading to the floor of the Baltimore City Council after members of the Judiciary and Legislative Investigations Committee voted 3-1 in favor of the controversial measure Nov. 2.

Bill 09-0406, which would impose fines on pregnancy centers that fail to post signs saying they don’t provide abortion or birth control, was amended in committee to reduce the proposed fine from $500 per day to $150.

The bill was also amended to require the city health commissioner to notify pregnancy resource centers when there is a complaint against them for failure to post the sign. The change would give pregnancy centers 10 days or more to comply with the law before facing a fine. The bill’s language was additionally altered to make failure to post the signs a civil rather than criminal offense.

Councilman James B. Kraft’s proposal to broaden the bill to require abortion providers to post signs indicating specific services they do not provide (including adoption, counseling and pre- and post-natal assistance) was rejected. Councilman Kraft and Councilwoman Mary Pat Clarke voted in favor of broadening the bill, while Councilman Robert Curran and Councilwoman Rochelle “Rikki” Spector did not.

Kraft was the only committee member who voted against sending the final version of the bill to the full City Council. Curran, Clarke and Spector voted in favor of advancing the bill. (Councilwoman and Committee Member Agnes Welch was not present.)

The bill now goes to the floor of the City Council for a Nov. 16 preliminary vote where it could face more amendments. If it passes, it is expected to go to another vote sometime after Thanksgiving. If it passes there, it will then go to Mayor Sheila Dixon who must decide whether to sign it into law.

In an interview with The Catholic Review prior to the Nov. 2 vote, Curran said reaching a decision on the bill was the “most anguishing” of anything he has done on the council. He spoke with Archbishop Edwin F. O’Brien about the bill and Monsignor William F. Burke of St. Francis of Assisi in Baltimore. Cardinal William H. Keeler also called him to discuss the measure, but Curran had not yet connected with the cardinal.

Curran said City Council President Stephanie Rawlings-Blake, the bill’s lead sponsor, made it clear that she wanted to see the bill sent to the full City Council.

“I made a commitment politically,” Curran said, noting that he’s not sure how he will vote on the measure in the coming weeks. “I acquiesced to the council president’s wishes.”

Curran said he received thousands of e-mails on the legislation. He visited two pro-life pregnancy centers before casting his vote.

Nancy Paltell, associate director for the respect life office of the Maryland Catholic Conference, said she was “very disappointed” at the committee vote.

“This is clearly something that targets only pro-life centers,” she said. “It seems the council is not really recognizing the value that pregnancy centers provide to the community. They are listening to hearsay about pregnancy centers from the bill’s ideological supporters.”

The bill is being pushed by abortion proponents such as Planned Parenthood and NARAL Pro-Choice Maryland, which claim that pro-life pregnancy centers “mislead” clients. Despite those charges, out of more than 50 people who testified at an Oct. 27 public bill hearing, no actual clients said they were misled.

During that same hearing, Bishop Denis J. Madden testified on behalf of Archbishop O’Brien against the measure on the grounds that it “harasses” pro-life pregnancy centers by singling them out. Carol Clews, executive director of the Center for Pregnancy Concerns in Baltimore, also opposed the bill and said pro-life pregnancy centers already clearly indicate they do not provide abortion or contraceptives.

Paltell, who represents the state’s Catholic bishops in Annapolis, urged Catholics who live in Baltimore City to contact their council members and urge them to reject the bill in the coming weeks.

“It’s really disturbing that ideology seems to be getting in the way of helping women follow their maternal instincts and choose child birth,” she said.

Visit www.mdcathcon.org for more information or to contact the City Council.