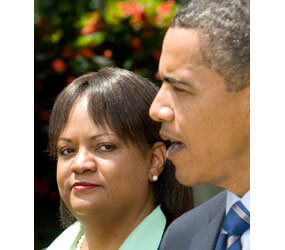 WASHINGTON – Plaudits for Dr. Regina Benjamin from an archbishop and colleagues and even her receipt of a pontifical medal may not be persuasive enough evidence of her credentials as a Catholic who supports church teaching for critics questioning whether she would become an advocate for legal abortion if she is confirmed as surgeon general.

An active parishioner of the Cathedral of the Immaculate Conception in Mobile, Ala., Benjamin was lauded by retired Archbishop Oscar H. Lipscomb of Mobile, who nominated her for the papal honor, the Pro Ecclesia et Pontifice Cross, in 2006.

Archbishop Lipscomb told Catholic News Service July 14 he was delighted with her nomination, saying, “She is a person who has a great sense of responsibility and is authentic in her Catholicism.”

Others, including the head of the Catholic Health Association, on whose board Benjamin serves, and the rector of the Mobile cathedral, praised her nomination and described her in terms of her strong Catholic faith.

But a comment from a White House spokesman that Benjamin “supports the president’s position on reproductive health issues” and a 13-year-old article about a policy approved by the American Medical Association on medical school curriculum were seen by some abortion opponents as evidence that Benjamin is “pro-abortion.”

A July 14 article by McClatchy newspapers cited the comment by White House spokesman Reid Cherlin to support what it called “her lesser-known support for abortion rights (that) puts her at odds with her church and some of the groups that have praised her work.”

The balance of Cherlin’s comment, provided to CNS by the White House, was:

“Like (Obama) she believes that this is an issue where it is important to try and seek common ground and come together to try and reduce the number of unintended pregnancies. As a physician, she is deeply committed to the philosophy of putting her patients’ needs first when it comes to providing care.”

The McClatchy story, published in the Miami Herald newspaper, noted that the clinic Benjamin runs in rural Alabama does not perform abortions, quoting a clinic employee who said patients seeking information about abortions would be referred elsewhere.

Beyond her remarks at the announcement of her nomination, Benjamin has not made any statement, which is standard practice for presidential nominees before their Senate confirmation hearings.

Several pro-life blogs raising warnings about Benjamin have referenced the McClatchy article and another by The Associated Press in 1996 in which Benjamin was quoted commenting about a nonbinding policy urging medical schools to teach about some of the ramifications of abortion.

The AP article primarily discussed the AMA’s decision to hold off on taking a stand on whether the procedure known as partial-birth abortion should be banned.

The pertinent section, near the tail end of the article about the December 1996 AMA meeting, said:

“The AMA voted to urge medical schools to expand their curriculum on abortion.

“Medical students now learn about abortion, but the AMA said budding doctors should learn more than just the ethics of it. Other issues are equally as important, such as counseling and possible complications.

“‘We are adopting a policy that medical school curriculum provide the legal, ethical and psychological principles associated with abortion so students can learn all the factors involved,’ said Regina Benjamin, an Alabama family doctor.”

The McClatchy article also pointed to Benjamin’s former position as a board member for the group, Physicians for Human Rights, which it said “has advocated access to safe abortions in its investigation of human rights conditions in some countries.”

The Web site of Physicians for Human Rights said it was founded in 1986 to use the skills and background of health professionals to “investigate the health consequences of human rights violations and work to stop them.” It was the co-recipient in 1997 of the Nobel Peace Prize.

Benjamin was a board member from 1996 to 2002. The Web site lists activities including investigations on human rights in professional medical practice, and human rights in armed conflict dealing with chemical weapons, war crimes, land mines and forensics.

The physicians’ group’s Web site does refer to abortion in various contexts. For example, a 2005 case study of health services for women in crisis in Swaziland talks about the country’s abortion laws and practices. Other reports discuss the problem of coerced abortion in some countries.

The McClatchy article quoted another member of the board at Physicians for Human Rights as saying abortion was never a focus of Benjamin’s advocacy work.

The group’s global health campaign deals with issues including policy advocacy for combating HIV/AIDS, strengthening health systems, and improving maternal health. Recent press releases from the organization called for investigations into the war-related deaths of prisoners in Afghanistan, and urged support for AIDS reduction initiatives and for an end to an immigration ban on people who are infected with HIV.

In light of suggestions Benjamin would be an advocate for legal abortion, Sister Carol Keehan, president and CEO of the Catholic Health Association, followed up her earlier statement supporting Benjamin’s nomination.

“We have an outstanding woman with a great heart for the dignity of people at all stages of life who has been active in her church and recognized by her local archbishop,” said Sister Keehan, a Daughter of Charity. “Her public and private statements on the dignity of life have always been consistent with church teaching.”

The post of surgeon general, which is a part of the Department of Health and Human Services, oversees the Public Health Service and is described officially as “America’s chief health educator … providing Americans the best scientific information available on how to improve their health and reduce the risk of illness and injury.”