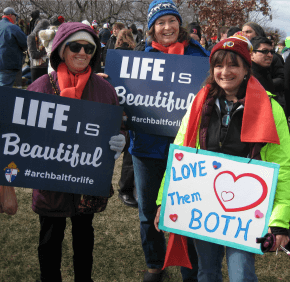 WASHINGTON, D.C. – The throngs of pro-life teenagers, young adults and adults at the Mass for Life, Jan. 27 at the Verizon Center, and later in the day at the National Mall for the start of the March for Life painted a different picture than Anna Sepanic’s social media feeds.

“On social media, the pro-life view is definitely in the minority in my generation,” said the 18-year-old parishioner of St. Timothy in Walkersville and senior at Walkersville High School.

Her classmate and fellow parishioner, Nick Thomason, 17, agreed, noting he saw a major change in discourse when he switched from private to public school.

“It’s really different,” he said, noting that at private school the issue was discussed, and many advocated in defense of life.

Sepanic said she was “super excited” to have the opportunity to stand up for life in person at the Mass and march.

“It’s about what we stand for,” she said. “I feel it’s very important to see so many young people standing for life. With the world as it is now, I think it’s important we’re all here together.”

Sepanic’s and Thomason’s sentiments were addressed by Father Conrad Murphy, parochial vicar of Holy Redeemer Parish in College Park and a priest of the Archdiocese of Washington, which has organized the Mass for Life for 24 years.

“Building a culture of life isn’t easy,” he said, delivering the homily. “It’s easy when you’re surrounded by 10,000 of your friends at a stadium; it gets a little harder when we go back home.”

Like the rich young man, Father Murphy had doubts and fears about giving his life to Christ.

“Brothers and sisters, this fear is a lie,” Father Murphy said, noting the rich young man ironically went away sad after opting for his worldly happiness.

Despite the somber topic – 58 million babies aborted in the U.S. and an unrelenting cultural battle – happy warriors seemed to fill the Mass and the march.

A father holds his son at the annual March for Life in Washington Jan. 27. (CNS photo/Tyler Orsburn)

Craig Gould, director of youth and young adult ministry for the Archdiocese of Baltimore, said that he had distributed approximately 700 tickets for the Mass for Life.

“It’s a chance for our younger people to see not just the wider church present but the wider church in action,” Gould said. “It’s having their voices heard and making a statement – it kind of gives them that opportunity.”

In addition to those who made their own way, about 20 buses from parishes across the archdiocese dropped marchers near the masses at the National Mall for the pre-march rally.

“Looking out, I see a collective humanity,” said Baltimore Ravens tight end Benjamin Watson, one of the featured speakers, “but I also see individuals that have their own spheres of influence.”

His comments alluded to the theme of the 2017 march, “The Power of One.”

Utah congresswoman Mia Love, the first black female Republican in Congress, told the story of Haitian immigrants who, having left their home country and two children with relatives in search of a better life for their family, encountered another challenge.

“It was inconvenient for them to find out they were pregnant with their third, because both had to work multiple jobs to make ends meet,” Love said.

Before wrapping up the story with the expected conclusion – the child was herself – Love emphasized that congresswomen and CEOs aren’t all humanity misses when babies are killed.

“That child may have been a friend that saves someone from suicide, or a woman that strengthens her family,” Love said. “Every time we kill a child through abortion, we kill our potential.”

Vice President Mike Pence headlined the rally; news had broken of his attendance only the night before.

“Life is winning again,” he said, again and again.

“Life is winning in the steady advance of science that illuminates when life begins. … Life is winning because of the millions of adopting families that open their hearts and their homes to children in need.”

As the Catholic press and pro-life outlets shift from reporting on President Donald Trump’s pro-life promises to his progress in fulfilling them, Pence told the crowd that 1600 Pennsylvania Ave. is “in the promise-keeping business.”

“I believe we will continue to win the hearts and minds of the rising generation if our hearts first break for young mothers and their unborn children, and we meet them where they are with generosity, not judgment,” he concluded.

Rene Sykes, one of 56 parishioners from St. Peter the Apostle in Libertytown who attended the march, said she attended because society has “gone off the rails.”

“The mercy of God has worked personally in my life,” she added, “and I felt that this is the least I could do to thank him for that.”

Matthew Himes, a seminarian for the Archdiocese of Baltimore, pauses during a search for breakfast prior to the 2017 Mass for Life at the Verizon Center in Washington with, from left, Jenna Kramer, Jillian Richardson, Katie Lutz, Kate Wyvill and Laura Kennedy, all parishioners of St. Mark in Fallston.  (Erik Zygmont/CR Staff)

Nancy Parode, a parishioner of Our Lady of the Fields in Millersville, was attending the March for Life for the first time.

My students inspired me to come,” said Parode, who teaches and tutors Catholic children who are homeschooled. “It’s really cool – it’s so fun to see all the groups of young people.”

She added that the pro-life cause seems to have gained some momentum recently.

“We are seeing many people get involved, as well as the possibility of government support,” she said. “It’s great and we are so happy to be here.”

Peter Rubeling, among the seminarians for the Baltimore Archdiocese who attended, believes the resurgence is due to “a return to the Beatitudes.”

“It’s great to see the culture of life promote peacefully and joyfully the beauty of life,” said Rubeling, whose older brother, Father Michael Rubeling, was ordained to the priesthood June 25, 2016. “This is what Christ asks us to do.”