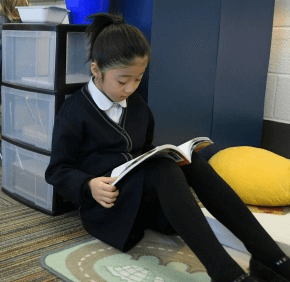 ELLICOTT CITY – The 14 South Korean students at Resurrection-St. Paul School for the month of January sat up straight to reflect on their experience on one of their final days at the pre-kindergarten-to-grade-8 school.

Didn’t they miss their parents?

“I don’t have much time to think of them,” said Alvin Song, a trim fifth-grader in sleek, dark-rimmed eyeglasses.

What have they been doing?

“At the weekend, we went to a dolphin sleepover,” said Daniel Park, a big sixth-grader with an old-soul demeanor, referring to a trip to the National Aquarium in Baltimore.

Hours before the students met the Catholic Review, they experienced their first American fire drill.

“I thought it was a real fire,” Daniel said, his eyebrows rising only slightly.

Resurrection-St. Paul has been hosting students from South Korea’s Yeollin Academy, an institution that supplements students’ school-day education with a focus on global society, for five years. The children choose American first names they use during their stay here.

Third-graders Kyle Park, left, and Patrick Dishon have some fun while reading a script for the drama program at Resurrection-St. Paul School in Ellicott City Jan. 26.  (Kevin J. Parks/CR Staff)
Principal Kwang Kyoon Lee  and Principal Chun Hee Shin, the husband-wife team at the helm of Yeollin, had sent their own two children to Resurrection-St. Paul approximately 15 years ago for three years.

When the two educators asked their children about their experience years later, the children reported that the time spent at Resurrection-St. Paul was the most valuable to them.

Lee and Shin asked the school if it would be willing to host Yeollin students on an annual basis, and the answer was an enthusiastic “Yes.”

“I thought I would be doing them a favor by letting them come over and see what we do,” said Karen Murphy, principal of Resurrection-St. Paul. “How arrogant was I? I think we gained more from them being here then they got from us.”

“They have done a fantastic job of sharing their culture with us as well as immersing themselves in ours,” she said. “They’re very observant, and they’re just jumping in and doing what their peers are doing.”

Andreas acknowledged that a month away from home is a lot for the first-grade girls.

“The nice thing is a lot of them get sent with siblings,” she said, “so they have each other.”

The students, she said, are initially a bit shy about speaking, but their confidence grows rapidly.

“I think sometimes they’re impressed at how much English they know,” she said. “You can see the expressions on their faces when they understand everything you’re saying, and they’re thrilled.”

At the beginning of the month – the South Koreans arrive after Christmas break – the students mostly respond to questions in single words or phrases, Andreas said.

“Now they’re initiating conversations, and I think that’s due to their confidence.”

In addition to Korean and English, many of the students speak Chinese, Japanese and sign language.

“I was teasing their principals and asked them if I could keep them until June,” Andreas joked.

In South Korea, the students attend both Catholic and public schools. On weekends and some evenings, they receive supplemental education at Yeollin.

They also engage in service, delivering coal to the homes of elderly Koreans and performing for them.

Their Yeollin principals accompany the students to the U.S. and live with them for their month at Resurrection-St. Paul.

In addition to the aquarium, the students have visited the Naval Academy in Annapolis and the monuments in Washington, D.C.

They got a special visit Jan. 26: Yumi Hogan, wife of Gov. Lawrence J. Hogan Jr. and the state’s first lady, stopped by for tea with the students.

“We thought it would be great for them, especially the girls, to see a woman in power,” Murphy said.

Every year, the students focus on a specific aspect of culture. This year, it was art, and the students created black and white ink paintings on traditional, handmade Korean hanji paper.

Murphy said that the students painted in their traditional Korean garb as other Resurrection-St. Paul students observed in the gym.

“It was silence,” Murphy remembered. “The kids sat on the floor and did their artwork, like a guided meditation.”

Afterward, they returned to their classrooms, where they taught the other students the art in groups of three.

Kate Park, a sixth-grader who also participated in the program last year, said she was initially “a little nervous” upon arriving at Resurrection-St. Paul.

“But I was happy to see again the teachers and friends,” she said.