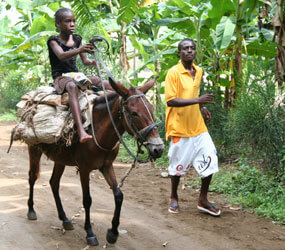 LES ANGLAIS, Haiti – If Tomas strikes Haiti as a tropical storm or hurricane, it will severely test residents of Les Anglais, in the southwestern corner of the country.

After repeated disasters, some of which swept homes, livestock and neighbors out to sea, community members organized a civil defense committee to provide early warning of impending disasters and help residents evacuate.

But civil defense groups such as the one in Les Anglais – supported by Catholic Relief Services, the U.S. bishops’ aid and development agency – face a seemingly impossible task. Deforestation of all but about 2 percent of the country has made landslides almost inevitable during heavy rains, but many people feel they have no alternative to living in danger zones.

“People cooperate and move when we tell them there is danger, but afterward they come back to the same place,” said Marie Lourdes Saint-Cyr, who is part of the early warning team in Les Anglais.

Poverty and government neglect of rural areas have made Haiti especially vulnerable to disasters such as earthquakes and tropical storms, which can be expected to strike periodically. Experts say a long-term solution requires attacking the problem on various fronts – economic development, infrastructure, improving health care and education, and reforesting the land to reduce soil erosion and stabilize hillsides.

In a country like Haiti, with a chronically ineffective government still reeling from the consequences of the Jan. 12 earthquake, those tasks seem overwhelming.

Haiti has about 936 people per square mile – about the same number as India, which has far more land – and slightly more than Japan, which has far higher per-capita income and better infrastructure. More than half of Haiti’s population lives in rural areas, trying to eke out a living from tropical land that is poorly suited for agriculture.

The few patches of forest remaining in the country are constantly being pilfered to make charcoal, the most common cooking fuel in both rural areas and cities.

“It all comes back to the number of people and the amount of resources,” said Blair Hedges, a biology professor at Pennsylvania State University, who has been studying Pic Macaya National Park, a remnant of forest at the top of the Les Anglais watershed, for the past three decades. During a research trip in early October, he found woodcutters felling trees for charcoal inside the poorly protected park.

Hedges estimates that the forest could be gone within a decade or two. Besides robbing Haiti of some of its remaining biological diversity – Hedges found a new frog species during his week in the park – that would place residents downstream in even greater danger.

On a hillside above the river, Paul Andre Norpelus surveys a cassava field that he hopes will provide a partial solution. With help from CRS and the Colombia-based International Center for Tropical Agriculture, Norpelus and other farmers from the local farmers’ federation are testing three new varieties of cassava, a staple food crop.

“We are looking for a variety that can produce food faster and yield more” than the variety commonly grown in Haiti, Norpelus said.

With two of the new varieties, farmers could triple their yield – and their income – without clearing more land. Word has spread, and local farmers “are very excited about it. They are waiting for us to move from field trials” to distribution of roots for planting, he said.

“One of the major (environmental) problems is linked to watersheds and the way people use the land,” said Dr. Jude-Marie Banatte, who heads programming for the CRS office in Les Cayes, in southwestern Haiti. “We’re trying to help people restore the land while improving their livelihood.”

Unlike farmers in some developing countries, who grow food mainly for their families and sell the surplus, Haitian farmers produce mainly for the market. Many rural families, whose diets are often deficient in key nutrients, were squeezed even more as relatives from Port-au-Prince took refuge with them after the Jan. 12 earthquake.

Some households doubled or tripled in size as families opened their doors to relatives. While most of the refugees have returned to the capital, some left their children with relatives in Les Anglais.

Schools accepted the children, and some schools receive assistance from CRS and other agencies to provide hot meals for students in an effort to combat child malnutrition. CRS also supports health programs for pregnant women, nursing mothers and toddlers, to help ensure that they receive adequate nutrition and immunization against childhood diseases.

Les Cayes Bishop Guire Poulard hopes those children will grow up to work the land like their parents, but he knows the chances are slim.

“Peasant life in remote areas does not offer any guarantee,” said Bishop Poulard, who grew up in a farm family and talks about the environment in his homilies. “Environmental stress is the most critical thing to address. This is becoming an obsession for me, which I am trying to transmit to young people.”

With elections scheduled for Nov. 28, environmental issues should be on the agenda for the next government, he said.

“For the past 50 years, the critical issue of environmental degradation has not attracted leaders’ attention enough,” he said. “This must be a priority for our next leaders. I keep encouraging candidates to go in that direction.”

In the garden behind his office, Bishop Poulard strokes the leaves of a small sapodilla tree and hugs a branch to his heart. Besides a huge mango tree, which has 12 varieties grafted onto it, he is adding other native plants as a contribution to conservation.

“It’s very little,” he said, “but if everyone does a very little, perhaps it will lead to change.”