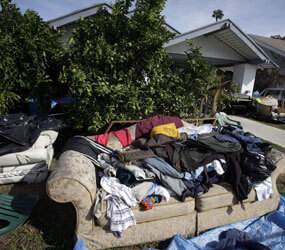 WASHINGTON – High unemployment, growing poverty and record budget deficits are combining to dim the hope that the nation’s economy will gain traction quickly.

While the United States is officially out of the recession that started in December 2007, the pace of job growth is sluggish, leading many to think that a “new normal” will emerge with leading economic indicators little improved.

The number of poor in America is growing, noted John Carr, executive director of the U.S. bishops’ Department of Justice, Peace and Human Development, in remarks made Feb. 14 at the Catholic Social Ministry Gathering in Washington.

“Poverty is at its highest level in 20 years,” he said, and from the halls of Congress, “the silence is deafening.” He also noted that President Barack Obama’s State of the Union address was the first since Harry Truman’s in 1948 to not make any mention of the plight of the poor or poverty in general – although Obama made one reference to “vulnerable” Americans.

The latest figures show that 14.3 percent of Americans live in poverty, 13 million are out of work and 43.6 million depend on the federal Supplemental Nutrition Assistance Program – what generations of Americans used to call food stamps – to keep hunger at bay.

“If Congress and the president will not speak up for the poor, we will,” Carr declared. “It is our vocation. It is our mission.”

The poorest Americans have long borne the brunt of the weak economy, according to Jesuit Father Fred Kammer, a former president of Catholic Charities USA who is now executive director of the Jesuit Social Research Institute in New Orleans. The institute examines social and economic conditions in the southern Gulf states, the effect of Hurricane Katrina and the roles of race, poverty and migration in the region.

Louisiana, Mississippi and Alabama, the states most affected by the 2005 hurricane, historically rank in the bottom five states on most overall poverty, child poverty and education yardsticks, Father Kammer said. Texas and Florida, which also were hammered by Katrina, often rank in the bottom third.

Ellen Nissenbaum, senior vice president for government affairs at the Center on Budget and Policy Priorities, showed during a Feb. 14 panel presentation how the 2001 and 2003 tax cuts were skewed to the richest Americans.

“The good news is that the safety net is generally quite strong for working families,” Nissenbaum said, adding the American Recovery Act – the much-debated $787 billion stimulus package passed two years ago – succeeded in keeping poverty rates flat. “Think of what the increase in poverty would have been had it not been for that law,” she said.

“Many of us think it was too little money, a view shared by many economists. If we can’t explain its success to the media,” Nissenbaum added, “the next time – and there will be a next time – we won’t be able to say, ‘Let’s return to the successes of the past,’ if people don’t think it was a success.”

Nina Valmonte, associate director for parish and community outreach and services for Catholic Charities in the Diocese of Brooklyn, N.Y., said times are tough in the nation’s only all-urban diocese. “People are spending 70 to 80 percent of their income on rent,” she said. “People can make $40,000 in New York City and still be very poor.”

In response to the scope of budget cuts being proposed in Washington, Bishop Stephen E. Blaire of Stockton, Calif., chairman of the bishops’ Committee on Domestic Justice and Human Development, told Congress in a Feb. 14 letter: “In a time of economic crisis, the poor and vulnerable are in greater need of assistance, not less. Preserving the national security of the country is without doubt imperative, but we cannot secure the nation while at the same time furthering the insecurity of the poor and vulnerable in our midst.”

As Catholic Social Ministry Gathering participants were preparing to talk to their congressional representatives, one asked what their response should be if a lawmaker or staffer demands ideas on how to solve the budget deficit.

Stephen Colecchi, director of the USCCB’s Office of International Justice and Peace, replied, “Everything should be on the table,” including defense and security measures the GOP wants left untouched.

Something else that should be on the table, he added, was revenues. “We use the word revenues. We don’t use the ‘T’ word,” a references to taxes, Colecchi said. “It’s a real deficit. It’s a real problem.” But the current deficit-cutting strategies in Washington, he added, are “not the way to go about it.”