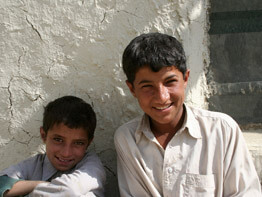 “Poverty is the source of the instability,” said Mohammad Zakir Stanikzai, a senior program officer for the U.S.-based humanitarian organization Church World Service. His work takes him to many of Afghanistan’s rural areas.
“People feel like: ‘Why not join the Taliban? We have nothing to lose,’“ he said.

Rahima Khorosh, a Kabul resident and teacher at a center for children who have experienced violence, explained how it impedes the daily life of Kabul residents.

Khorosh recalled that Kabul was rocked by three suicide bombings in September and that her neighbors lost a daughter in one of the blasts.
“I don’t know what will happen to me when I take my (daily, 15-minute) walk to the center,” Khorosh said.

The British news agency Reuters reported Jan. 17 that attacks by the Taliban, backed by al-Qaida, have increased in the past two years. The Islamic-fundamentalist Taliban ruled most of Afghanistan from 1996 until U.S.-led forces ousted them in 2001.

Fear of attacks has complicated humanitarian efforts in Afghanistan, where aid work has never been easy in the best of circumstances.

“It is increasingly difficult for internationals to travel with confidence beyond urban areas,” said Paul Hicks, country representative in Afghanistan for Catholic Relief Services, the U.S. bishops’ overseas relief and development agency. “All of this means that we cannot do as much work as we would like or provide the level of technical support and field training that we would like.”

Noting that threats are not always related to the Taliban, Hicks said security in the field mostly “depends on our relationships with local community leaders as well as the local government leaders.”

“While they keep us safe, they are also often under increasing pressure and more and more frequently recommend that we curtail traveling for periods of time,” he told Catholic News Service in late December.

However, Hicks said there remains an impressive “drive and determination of local people,” to deliver humanitarian assistance to areas that need it. And overall, he said, “Afghanistan is a dynamic and exciting country.”

He said what is “most impressive and inspiring” is Afghans’ resilience.

“There is a real will to see progress in the country, and there is personal drive for each person to advance their professional training,” Hicks said.

Noting Afghans’ independence and “healthy resistance to impositions from the outside,” Hicks said, “The international community will need to learn to act with more humility in Afghanistan, recognizing that the Afghan people need to be planning and making decisions that affect their futures.”

Herlinger, a New York-based freelance journalist, was recently on assignment in Afghanistan for Church World Service.