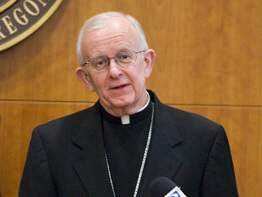 PORTLAND, Ore. – The first Catholic diocesan bankruptcy proceeding in the nation ended April 17 when a federal judge approved a $75 million settlement of clergy sexual abuse claims and a financial reorganization plan for the Portland Archdiocese.

Smoothing the way for U.S. Bankruptcy Judge Elizabeth Perris, lawyers at the last moment negotiated payment for all remaining sex abuse claims. A last case, which was not over sex abuse, was settled just a few hours before the court approval was announced.

Since February, lawyers from both sides worked out the two dozen most difficult cases, bringing the total settled claims under the 33-month bankruptcy to 177.

Checks will go out to victims at the start of May.

The same day the Portland settlement was finalized, all parties to similar bankruptcy proceedings in the Diocese of Spokane, Wash., filed court papers there agreeing to a $48 million settlement of clergy sex abuse claims there.
More than 160 victims are reportedly involved in the Spokane settlement.

U.S. Bankruptcy Judge Patricia Williams scheduled a hearing April 24 at which she was expected to give the Spokane settlement the court’s official approval.

At a press conference announcing details of the Portland settlement, Portland Archbishop John G. Vlazny said, “It is my sincere prayer that our ability to compensate the many victims will assist them in their efforts to achieve personal healing and peace of heart. I pray for them daily and I know that the Catholic people of Oregon join me in asking God to bless them.”

The archbishop again apologized to those who were abused as children and said his door continues to be open.

He thanked Catholics who continued to back the church’s mission throughout the bankruptcy proceedings, which began in July 2004, and apologized to laity, religious and clergy who have been “humiliated and penalized” by the clergy sex abuse scandal though they bore no personal guilt.

The archbishop announced a service for reconciliation and healing set for June.

Reconciliation with all who have been hurt is “the ultimate grace we seek,” he said. He said he hopes the transparent bankruptcy process will ensure that civil and church institutions learn the lessons definitively.

The archdiocese will open relevant clergy personnel files in mid-May, a step requested by lawyers for claimants and the media.

Confirmation of the reorganization plan followed a vigorous five-month mediation in which two judges hammered out settlements of sex abuse cases.

U.S. District Judge Michael Hogan, one of the mediators, said at the press conference that the people of Oregon were well served by the negotiation of settlements. He and the other mediator, Circuit Court Judge Lyle Velure, figure they saved about six to eight months of trial time.

The bankruptcy proceedings involved 89 lawyers in all.

Kelly Clark, a Portland attorney who represents 55 abuse claimants, said the plan is clearly in the best interest of his clients.

“They need closure, they need certainty, they need this chapter of their life concluded,” Mr. Clark said during testimony in bankruptcy court the week before. “I have serious concerns about the emotional health of some of my clients if they were thrown again into uncertainty.”

Mr. Clark said some settlements include letters of apology from the archdiocese and meetings between claimants and the archbishop. He said the archbishop already “graciously agreed” to pray with one man.

Tom Stilley, attorney for the archdiocese, said the plan had been “negotiated in good faith.”

John Rickman, chair of a committee set up to look out for the interests of 400,000 Catholic parishioners in the archdiocese, praised the plan because it protects parish and school property from being counted in possible future claims against the archdiocese. At the press conference he said Catholics regret the great harm caused by some members of the church.

Lawyers for the families, alumni and backers of three archdiocesan high schools also voiced support for the plan. Those schools, Perris had ruled earlier, could have been tapped as part of a larger settlement.

Allied Irish Bank has agreed to loan up to $40 million to the archdiocese for settlements and other bankruptcy-related expenses. John McGrath, the bank’s vice president, told the court that a cap on the fund for future claims was one reason the bank agreed to the loan.

Under the plan, no parish or school property will be liquidated to pay victims.

A court appeal over who is the owner of those properties halted in December when the two sides announced their settlement. Judge Perris had ruled in late 2005 that the archdiocese was the owner, meaning parishes and schools could be counted as part of the bankrupt estate. Before the issue became moot, a coalition of parishes vowed to appeal her ruling all the way to the U.S. Supreme Court.

Michael Batlan, a bankruptcy trustee, told the court April 10 that the settlement plan’s great quality is its certainty.

“Ongoing litigation is not always the best way for claimants,” Mr. Batlan said, adding that if the settlement were not approved all the cases would have to be retried.

The confirmation April 17 lifted a gag order imposed by mediators. Lawyers from both sides had been unable to comment on the case. Coverage by the Catholic Sentinel, the Catholic newspaper of Portland and the neighboring Diocese of Baker, Ore., had been curtailed by the order for the past eight months.

In July 2004, Portland became the first of five dioceses to file for bankruptcy protection because of child sexual abuse claims. Since then the dioceses of Spokane; Tucson, Ariz.; Davenport, Iowa; and San Diego have entered bankruptcy proceedings to deal equitably with large sex abuse claims they face.

Tucson, which filed for bankruptcy protection in September 2004, emerged with a court-approved settlement and reorganization in July 2005. Spokane filed in December 2004, and the expected court confirmation of its settlement this April would make it the third diocese to complete the proceedings.

Davenport, which filed last October, and San Diego, which filed this February, are still in the early stages of the proceedings.