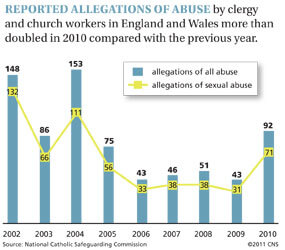 Allegations of sexual and physical abuse against priests, religious men and women, church employees, volunteers and parishioners more than doubled in 2010 compared with the previous year, according to figures released July 28 in the 2010-11 annual report of the National Catholic Safeguarding Commission.

The commission is the agency of the Catholic Bishops’ Conference of England and Wales that oversees child protection programs.

Exactly half of the allegations were dismissed after investigations by law enforcement authorities and 41 remain under investigation, the report said. One resulted in a police warning, two in continuing court hearings and two in prison sentences, according to the report.

The report said “non-favorable” media reporting of Pope Benedict’s visit “focused on the scandal of child abuse by members of the clergy and religious.” The media reports had “profound impacts” on the ability of abuse survivors to “articulate their experiences” and also triggered a more energetic response by church officials to “bring justice and healing” to them, the document said.

Because of the adverse publicity, the report explained that child protection officials were able to openly “describe mechanisms for dealing with allegations and the actions taken where concerns arise.”

“This, coupled with the fact that the pope’s visit undoubtedly brought forward memories and emotions, both positive and negative, has resulted in significantly increased numbers of allegations of abuse from the 1960s and 1970s being received in our safeguarding offices,” the report continued.

Anne Lawrence, co-chair of Minister and Clergy Sexual Abuse Survivors, a British group for victims of clerical abuse, said she was not surprised by the spike in allegations.

In a July 25 email to Catholic News Service, she said the pope’s visit “would have stirred up the terrible traumas people have held on to for decades.”

But she added that she was concerned that the church was failing to respond to the demands of abuse survivors.

“It isn’t about numbers anymore. We know thousands of children have been abused within the Catholic Church by clergy and religious here in England and Wales. It’s about the quality and effectiveness of the response. It isn’t only about safeguarding others, it’s also about justice,” she wrote.

She called for the church to increase funding for counseling and reparation, to publicly apologize and provide continued support to victims.

Chris Saltrese, a Catholic lawyer who specializes in representing people who say they were falsely accused of abuse, criticized the report for ignoring the likelihood that a large number of the claims were not credible.

“Away from the pieties and breast-beating the most telling part of the report lies hidden in plain view relegated to an appendix and that is that in 2009 and 2010 there were 70 statutory investigations into abuse allegations which led to not a single conviction,” wrote Saltrese in a July 28 email to CNS.

“That not one of 70 allegations met the very low evidential test sufficient for prosecution and conviction should make (the commission) pause for thought,” he said.