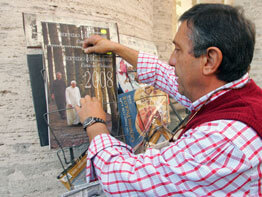 VATICAN CITY – Catching a glimpse of Pope Benedict XVI at the Vatican this summer will be more difficult than ever.

After his July 2 weekly general audience, the pope was scheduled to move out to the papal summer villa in Castel Gandolfo, south of Rome, and remain there until he leaves for his July 12-21 trip to Australia for World Youth Day.

Publishing the pope’s summer schedule July 1, the Vatican said the pope would not hold his Wednesday general audiences July 9-Aug. 6.

The pope will spend his customary mountain vacation at the Bressanone seminary July 28-Aug. 11. Although it will be his first visit to Bressanone as pope, he passed the summers there 10 times as a cardinal between 1977 and 2004.

The Vatican said the Wednesday general audiences would begin again Aug. 13, although it did not say whether the gatherings would be held at the Vatican or at Castel Gandolfo.

The pope will travel again Sept. 12-15, visiting Paris and Lourdes in France to mark the 150th anniversary of the Marian apparitions to St. Bernadette Soubirous at Lourdes.