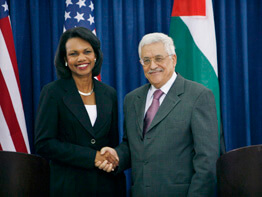 VATICAN CITY – Pope Benedict XVI declined to meet with U.S. Secretary of State Condoleezza Rice during his August vacation, but Vatican officials said it should not be interpreted as a diplomatic snub.
“The only reason she wasn’t received was that she came during a period when the pope doesn’t receive anyone. It was a purely technical question of protocol,” an informed Vatican source told Catholic News Service Sept. 20.
The source said it was “absolutely not” the Vatican’s intention to rebuff Ms. Rice or signal disagreement with U.S. policy on the Middle East.
Ms. Rice was about to travel to the Middle East for diplomatic talks in early August when the request for a papal meeting was made. The pope was vacationing at his summer residence in Castel Gandolfo, outside Rome.
Even as it declined the request, the source said, the Vatican made it clear that top officials of the Vatican’s Secretariat of State would be happy to meet with Ms. Rice at any time.
“So clearly there was no intent to send a negative signal,” the source said.
Ms. Rice instead ended up speaking by telephone with Cardinal Tarcisio Bertone, Vatican secretary of state, while he was visiting the United States in August.
Cardinal Bertone later praised Ms. Rice’s mediating attempts, saying, “I recognize the untiring efforts of the secretary of state in reconciliation among the governments of the Middle East.”
The Italian newspaper Corriere della Sera first reported on the Vatican’s rejection of the U.S. request. It said Ms. Rice had let the Vatican know that she “absolutely needed to meet with Pope Benedict” before her Middle East tour. The newspaper said Ms. Rice hoped a papal audience would bolster her influence in the talks with Middle East parties.
The article went on to say the Vatican’s refusal underlined a fundamental foreign policy divide between the Vatican and the United States. The article was written by Massimo Franco, author of a respected book on U.S.-Vatican relations, “Parallel Empires.”
The Vatican spokesman, Jesuit Father Federico Lombardi, had no comment on the Corriere della Sera report.
U.S. Ambassador to the Holy See Francis Rooney released a brief statement emphasizing overall U.S.-Vatican cooperation.
“Since the beginning of formal diplomatic relations in 1984, the U.S. and the Holy See have enjoyed a high level of cooperation on a wide array of issues, ranging from protection of religious freedom and human rights around the globe to eradicating trafficking in persons and HIV/AIDS,” Mr. Rooney said.
“Our relationship remains strong today. Our working relationship is dynamic and productive at all levels,” he said.
In an effort to cut down on the number of papal audiences, early in his pontificate Pope Benedict made it a practice not to meet with government ministers below the level of prime minister.
There have been exceptions, however, and Vatican sources said an exception would no doubt be made for Ms. Rice if another request were made when the pope was at the Vatican.
Over the years, Ms. Rice’s comments have sometimes drawn private criticism from Vatican diplomats. One such occasion was in mid-2006, when she said the devastating fighting in Lebanon represented “the birth pangs of a new Middle East.”
In 2003, as the U.S. geared up for the invasion of Iraq, Ms. Rice publicly questioned the Vatican’s moral arguments against preventive war.