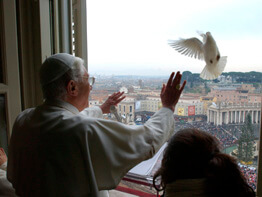 VATICAN CITY – They are not pushy or pesky; rather, the pope’s own paparazzi are the epitome of discretion and class.

Vatican photographers stand out from other media shutterbugs, not just because they’re always dressed in ironed dark suits and ties, but because, coolly clicking away, they are the ones standing right next to the pope.

The papal photographers are also the only ones allowed to shadow the pontiff almost everywhere he goes, even during more private moments – be they special audiences inside the Vatican with heads of state or an intimate luncheon with cardinals or bishops.

According to the head of the Vatican’s photo service, Salesian Father Giuseppe Colombara, the job of the four official papal photographers is to create a visual record of the pope’s activities and important Vatican events.

With the click of a shutter, photographers immortalize an “unrepeatable masterpiece of an instant,” he said.

For the past 30 years, papal photographers have captured and preserved thousands of unforgettable scenes as varied as Pope John Paul II collapsing into the arms of his aide after being hit by a bullet in 1981 to him trying on U2 singer Bono’s sunglasses during a 1999 meeting with the Irish rock star.
These photos and more are on display April 25-May 27 at a special exhibit at the Braccio Carlo Magno, a hall next to St. Peter’s Basilica, to celebrate the photo service’s 30th anniversary and the second anniversary of Pope Benedict XVI’s election.

Called “Vatican Click,” the exhibit showcases 382 photos from the more than 5 million housed in the Vatican’s photo archives.

The exhibit also shows early black-and-white shots of life in and around the Vatican during the 1930s-1960s: Ethiopian seminarians leaping in a rare Roman snowfall, and Italian dictator Benito Mussolini watching workmen build the Via della Conciliazione, the wide boulevard leading to St. Peter’s Square.

Then in 1977, the newspaper’s editor in chief decided the paper should hire its own photojournalists who would work exclusively and specifically on covering the Vatican and the pope.

The timing was providential as just one year later, the most media-friendly pope in modern times, Pope John Paul, was elected.

Father Colombara said the late pope was a natural.

“He had an extraordinary sensibility. He just knew, felt when a photographer was near and instinctively, almost automatically, would smile,” move or turn in a way that was perfect for a picture, he said.

A close, though professional, rapport grew easily over the years between Pope John Paul and the Vatican photographers, said the Salesian priest.

But the shooting and snapping ease hit a speed bump in 2005 after the election of Pope Benedict, who was not used to being trailed by cameramen and having bulbs flash and shutters click at his every move.
However, Pope Benedict is much more comfortable now with his personal paparazzi, Father Colombara said, and has often directly expressed to the photographers his appreciation for their hard work.

Pope Benedict is also the first pope to have granted the Vatican’s television and photography crews wide permission to film him in his private apartments, showing “without mystery, without secrets that the day in the life of a pope is made up of a lot of work and simplicity,” he said.

Father Colombara said the best pictures of any pope are the ones in which he “radiates human warmth” and when his fatherly face “points to the very meaning of (his) mission: the person of Jesus.”

While pictures of Pope John Paul at Jerusalem’s Western Wall or Pope Benedict in a Turkish mosque have important historical value, sometimes it’s the simpler shots of a pope hugging a child or praying the rosary that have a greater, more emotional impact on the viewer.

When a picture of a pope expresses “love, welcoming, understanding, acceptance,” it can “make the church loved very, very much and be very appreciated by almost everyone,” whatever their faith belief may be, he said.
Just as the church hired great painters and sculptors to depict the beauty and mystery of God and the Gospels, it also has employed the power of the photograph, which can be highly effective in a world where “the image is everything,” he said.

Father Colombara said that since last summer Vatican photographers have switched to shooting exclusively in digital, which has not only facilitated archiving and research, but has also widened the public’s access to their treasures.

With Vatican photographers churning out at least 2,000 photos on a typical Wednesday, when the pope’s general audience is held, the Web site’s pictures are simply arranged chronologically in flipbook fashion, giving viewers a chance to feel as if they are right next to the pope.