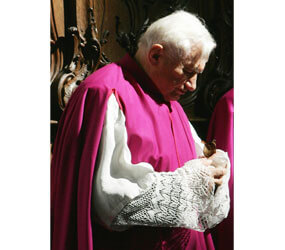 WARSAW, Poland – The brother of Pope Benedict XVI apologized to child victims of sexual abuse at his former school even though he said he was unaware of the alleged incidents.

“There was never any talk of sexual abuse problems and I had no idea that molestation was taking place,” Monsignor Georg Ratzinger said, recalling his 30 years as choirmaster at the school that trains the elite boys’ choir of the Regensburg Cathedral.

His comments came during an interview with the German newspaper Neue Passauer Presse March 9.

“I’m deeply sorry for anyone whose spiritual or physical integrity was injured by abuse,” said Monsignor Ratzinger, who was choirmaster between 1964 and 1994. “Today, such things are condemned even more because of greater sensitivities. I also condemn them, and simultaneously ask pardon from the victims.”

Monsignor Ratzinger recalled that the priest who headed the school from 1953 until his death in 1992 had slapped boys in the face, but said he had not considered such punishments “particularly brutal.”

“If I’d known the exaggerated vehemence with which the director acted, I would have reacted,” Father Ratzinger told the newspaper in his native Bavaria. “But at that time, it was the way of dealing with mistakes or the deliberate nonfulfilment of duties. I was happy when caning was totally banned in 1980, and I felt internally relieved.”

However, a former pupil at the school, Frank Wittenbrink, now a composer, told Germany’s Der Spiegel magazine that the teaching staff must have known about other forms of abuse.

The statements appeared as the president of the German bishops’ conference, Archbishop Robert Zollitsch of Freiburg, prepared for a March 12 meeting with Pope Benedict to discuss the scandal which erupted in late January.

“We ourselves have already said a meeting of all socially relevant groups would be very helpful,” Bishop Ackermann said in a March 8 statement on the German bishops’ conference Web site. “The minister’s invitation is an important step toward the joint goal of speedily tackling this entire problematic issue.”

Abuse claims have been reported to date in at least 17 of the German church’s 27 dioceses, with the most recent allegations surfacing March 8 and 9 against Catholic institutions in Hildesheim, Dusseldorf and Limburg, as well as in Bavaria against a Franciscan Capuchin house at Burghausen and a Benedictine monastery at Ettal.

Speaking to journalists March 9, German Chancellor Angela Merkel praised the church’s efforts to confront the accusations, which include opening a hot line for victims and updating 2002 church guidelines on abuse reporting. The efforts indicated, she said, a “very serious wish to deal with the problems.”

However, the justice minister, Sabine Leutheusser-Schnarrenberger, told the Suddeutsche Zeitung newspaper March 9 that the church also needed to “give a clear signal to the victims,” such as by suggesting “voluntary compensation” in case where legal claims had lapsed.

The press office of the German bishops’ conference in Bonn declined to answer inquiries from Catholic News Service about abuse claims.

Bishops in neighboring Austria and in the Netherlands also considered responses to abuse claims.

In Austria, Abbot Bruno Bauer of St. Peter’s Abbey in Salzburg resigned March 8 after he was accused of an act of abuse committed 40 years ago. The Der Standard newspaper reported that an unnamed man contacted the ombudsman for the Salzburg Archdiocese about the incident in late 2009 after Abbot Bauer was elected to oversee the abbey.

Salesian Father Herman Spronck, the most senior member of his order in the Netherlands, agreed March 1 to investigate claims of child abuse at a monastery.

The Dutch bishops’ conference announced an independent inquiry March 9 into allegations of sexual abuse of children by priests at church schools and apologized to victims.

The inquiry follows reports of at least 200 accusations of abuse.

“The number of reports of abuse in former Catholic educational establishments requires further investigation,” the bishops said after a meeting in the central city of Zeist.