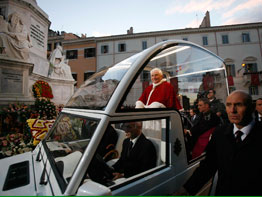 VATICAN CITY – While Pope Benedict XVI probably has not begun packing his bags for his April 15-20 trip to the United States, one big Vatican package was prepared just after Easter.

The white, 2002 Mercedes-Benz popemobile has left the Vatican and will be delivered by an air cargo company in the first days of April, said Alberto Gasbarri, the chief organizer of papal trips.

The Vatican has three popemobiles currently in use:

– A four-month-old, open-topped Mercedes based on the company’s G500-series sport utility vehicle, used almost exclusively in St. Peter’s Square. The vehicle has an attachable, curved windshield that can protect the pope from rain and wind. Mercedes describes the color as “Vaticanmystic white.”

– Two closed, white popemobiles, which are modified versions of the Mercedes-Benz ML430 off-road vehicle. The “glass” top is a cube made of advanced, bulletproof plastic. Both vehicles feature a high seat so the pope can still be visible.

One of the ML430 models is being used for the U.S. trip, Gasbarri said.

While long, multiple-city papal trips often require shipping both popemobiles to different cities, then flying them to another stop, Gasbarri said, “With only two cities on this trip, one popemobile will be enough.”

An official in the Vatican motor pool said there really was not a choice to make between the two ML430s since “one is in the repair shop.”

Mercedes-Benz originally delivered one of the vehicles with a “mother of pearl” tint, but the Vatican decided it was too gray, and so repainted it, the motor pool official said.