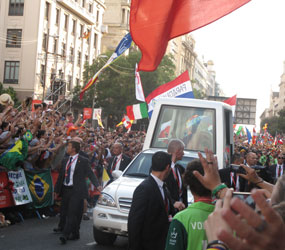 MADRID – Pope Benedict XVI’s aides had seen enough. The pontiff was trying to lead a World Youth Day vigil Aug. 20 at Cuatro Vientos, a former air base, when a powerful thunderstorm swept into town.

Advisors told the pope it was time for him to leave behind the more than 1 million people in front of him and seek shelter. As wind and rain ripped through the city, he refused.

A mere 30 rows from the stage were three representatives of the Archdiocese of Baltimore – Keisha Miles, Meghan Cosgrove and Katie Bechtel.

“The rain was the best part,” said Bechtel, a parishioner of St. Ann in Hagerstown, “because everyone just started jumping and cheering. They actually started a new cheer, ‘We are with you!’ in Spanish.”

A few hundred feet away, 23 other members of the Archdiocese of Baltimore’s contingent were equally undeterred. They had traveled thousands of miles to be with the universal church during the previous week. Nothing would drive them away either, as they chanted “Benedicto!”

Scattered throughout the larger crowd were groups from Mount de Sales Academy in Catonsville and St. Mary’s High School in Annapolis. They, too, felt something deeper happening.

“Everyone was there for the same reason – to see the pope and to experience God,” said Haley Jones, a Mount de Sales student and a parishioner of St. Joseph in Odenton.

For about 30 minutes, the rain and wind died down. Pope Benedict led adoration of the Blessed Sacrament.

“Dear young people,” he said, “in these moments of silence before the Blessed Sacrament, let us raise our minds and hearts to Jesus Christ, the Lord of our lives and of the future. May he pour out his spirit upon us and upon the whole church, that we may be a beacon of freedom, reconciliation and peace for the whole world.”

The pope left after adoration, while hundreds of thousands of pilgrims remained to sleep at the base during a cold night. When he returned the next morning, Aug. 21, to celebrate World Youth Day’s Mass, he brought with him a challenge.

“We cannot encounter Christ and not want to make him known to others,” the pope said during his homily. “So do not keep Christ to yourselves! Share with others the joy of your faith. The world needs the witness of your faith, it surely needs God.”

Bechtel was asked if she thought, as a little girl, she’d ever be so close to the pope to hear his words. Her eyes welled up with tears.

“I’m really lucky,” she said, choking back her words.

For video and audio of the vigil, closing Mass and Katie Bechtel’s response, visit CatholicReview.org/palmerblog.