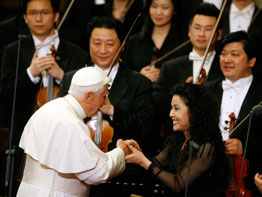 VATICAN CITY – In welcoming China’s Philharmonic Orchestra to the Vatican, Pope Benedict XVI said he was extending a hand of friendship to the Chinese people and greeting the country’s Catholics.

The pope also wished the people of China well in their preparations for the upcoming Olympics, calling the games “an event of great importance for the entire human family.”

The Beijing-based, state-run orchestra, together with the Shanghai Opera House Chorus, performed for the first time a concert in honor of the pope in the Vatican’s Paul VI hall May 8.

Some 7,000 people, including top Vatican officials and diplomats, attended the hourlong concert.

Before beginning the performance, Yu said the concert was of “historical significance” and said he hoped it would “help spread a message of peace and love.”

“As the leading symphony in China, it is our unwavering belief that music can serve as a powerful instrument to deepen cultural understanding among people of all nations,” Yu said.

He said the musical repertoire chosen for that evening “reflects the value of every man and woman in the world, regardless of cultural difference, in the spirit of peace and love.”

The pope, an aficionado of Mozart and classical music, sat in a special chair in the middle aisle of the audience hall.

In remarks at the end of the performance, the pope said, “Music and art in general can serve as a privileged instrument for encounter and reciprocal knowledge and esteem between different populations and cultures.”

He praised the orchestra’s “high-quality musical performance” and thanked the musicians in Chinese at the end of his speech.

The pope noted “with pleasure” the orchestra and choir’s interest in European religious music.

All different cultures can appreciate music with religious themes, such as Mozart’s “Requiem,” because all music “transcends the boundaries of every individual culture” and “expresses universal human sentiments,” he said.

The pope said the performance also helped put the audience “in touch, as it were, with the living reality of the world of China” and helped them better understand “the history of the Chinese people, their values and their noble aspirations.”

He told the artists that the evening gathering was also an opportunity for him “to reach out” to all people in China “with a special thought for those of your fellow citizens who share faith in Jesus and are united through a particular spiritual bond with the successor of Peter.”

The concert was seen as a positive step in improving diplomatic relations between the Vatican and China. Official diplomatic ties have been severed since 1951.