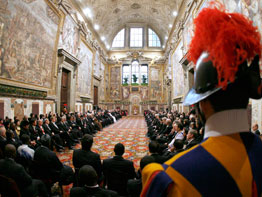 In Iraq, the pope said Jan. 7, the latest attack on Christian churches reflects a continuing climate of terrorism and violence in the country and illustrates the need for constitutional reform to safeguard the rights of minorities.

On nuclear weapons, he urged the international community to undertake a joint effort to prevent terrorists from gaining access to weapons of mass destruction.

The pope also condemned “continually perpetrated attacks” against human life, in areas ranging from the death penalty to biotechnology, and criticized efforts to weaken the traditional family and the institution of marriage.

The world’s problems illustrate that real solutions must be “solidly anchored in natural law, given by the Creator,” the pope said.

“This is another reason why God can never be excluded from the horizon of man or of history. God’s name is a name of justice; it represents an urgent appeal for peace,” he said.

The pope delivered the annual talk, sometimes called his “state of the world” address, to representatives of the 176 states that have diplomatic relations with the Vatican.

The papal speech was not merely a litany of global troubles. It cited positive economic and social developments in Latin America, hailed the dismantling of North Korea’s nuclear weapons program, and noted progress in intercultural dialogue and, more particularly, in the church’s own dialogue with Muslims.

However, the pope said a rapid overview of the world shows that “the security and stability of the world are still fragile.”

That is clearly the case in Iraq, he said, where reconciliation is urgently needed.

“At present, terrorist attacks, threats and violence continue, especially against the Christian community, and the news which arrived yesterday confirms our concern,” he said.

Church officials said Jan. 6 that bombs had damaged four churches and three convents in Baghdad and Mosul in what appeared to be coordinated attacks. Several people were reported injured.

In Iraq, the pope said, “it is clear that certain difficult political issues remain unresolved. In this context, an appropriate constitutional reform will need to safeguard the rights of minorities.”

He said those affected by the Iraq War – including refugees and their host countries – need generous aid from the international community.

Turning to Iran, Pope Benedict expressed his support for “continued and uninterrupted pursuit of the path of diplomacy” in resolving the issue of Iran’s nuclear program.

On the Israeli-Palestinian conflict, he praised the results of the recent Annapolis, Md., peace conference, which he said pointed toward the “abandonment of partisan or unilateral solutions.” The important thing now is to implement the commitments that were made, he said.

In Lebanon, a country shaken by trials and violence, the people need to be able to freely decide their future, and political leaders should put aside selfish interests and pledge themselves to dialogue, he said.

The pope pointed to several “crisis situations” in Asia, including Pakistan and Afghanistan, two countries torn by violence, and Sri Lanka, where he said there can be no further delay in ending the “immense sufferings” caused by continuing civil strife. He offered a prayer for a “season of dialogue” and respect for human rights in Myanmar.

He did not mention China in his speech. Last year, he wrote a lengthy letter to Chinese Catholics promoting greater church-state cooperation.

The pope began remarks on Africa by expressing his “deep anguish” at the ongoing cycle of hunger and death in Darfur, a western region of Sudan where hundreds of thousands have perished, and he said he hoped a new aid effort there can bring some relief. He urged an end to military operations in Somalia to allow the delivery of humanitarian supplies, and said he was worried about the abrupt outbreak of ethnic violence in Kenya.

In Europe, he said, a definitive status for Kosovo needs to be determined in a way that respects the rights of all the inhabitants and avoids a return to “the specter of violence” in the Balkans.

Addressing the danger of nuclear armaments, the pope urged the international community to make “a global commitment on security” that can deal in particular with new threats from terrorism.

“A joint effort on the part of states to implement all the obligations undertaken and to prevent terrorists from gaining access to weapons of mass destruction would undoubtedly strengthen the nuclear nonproliferation regime and make it more effective,” he said.

The pope also encouraged the reduction of conventional weapons and cluster bombs, considered a particular threat to civilians.

In a passage that hinted at a potential theme for his planned U.N. visit in April, the pope noted that 60 years ago the United Nations adopted the Universal Declaration of Human Rights, which enshrined human dignity.

“In every continent the Catholic Church strives to ensure that human rights are not only proclaimed but put into practice,” he said.

“The church willingly undertakes this service to the true dignity of human persons, created in the image of God. And on the basis of these considerations, I cannot but deplore once again the continual attacks perpetrated on every continent against human life,” he said.

In bioethics, new discoveries or technological progress should not require people to choose between science and morality – “rather, they oblige us to a moral use of science,” he said.

He said he rejoiced at the recent U.N. support for a moratorium on the death penalty and added: “I earnestly hope that this initiative will lead to public debate on the sacred character of human life.”

Echoing a number of speeches to political and other groups over the last two years, the pope defended the traditional family.

“I regret, once again, the disturbing threats to the integrity of the family founded on the marriage of a man and a woman. Political leaders of whatever kind should defend this fundamental institution, the basic cell of society,” he said.

He said religious freedom is still not fully respected in many parts of the world.

The pope closed his talk with a reflection on peace, which he said must involve various areas of human development: food, water and energy resources, access to medicine and technology, and even the monitoring of climate change.

In confronting these serious problems, diplomats should build on the positive, he said, telling them, “Diplomacy is, in a certain sense, the art of hope.”