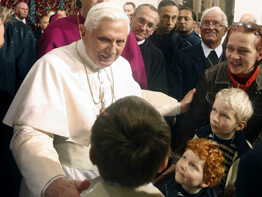 MARIAZELL, Austria – Inspired by a small wooden statue of Mary and the child Jesus, Pope Benedict XVI appealed on behalf of the world’s suffering children, including the poor, the orphaned and those forced to fight in wars.
The pope spoke during Mass Sept. 8 for some 30,000 pilgrims at the Austrian shrine of Mariazell, where a linden wood statue of Madonna and child has been revered for 850 years. The liturgy was the centerpiece of the pontiff’s three-day trip to Austria.
The pope knelt in prayer before the statue, which is kept in a sanctuary chapel where a Benedictine monk first brought it in 1157. The carved image depicts Jesus holding an apple as he sits on Mary’s lap.
At an outdoor Mass celebrated under intermittent rain, the pope said it was important to remember that Christ came as a child – not with “external force,” but in the “powerlessness of his love, which is where his true strength lies.”
“He places himself in our hands. He asks for our love. He invites us to become small ourselves, to come down from our high thrones and to learn to be childlike before God,” he said.
The child Jesus should remind people of all the children in the world, “children who live in poverty; who are exploited as soldiers; who have never been able to experience the love of parents; sick and suffering children, but also those who are joyful and healthy,” he said.
The pope then chided Europe, saying attention to children is diminishing and alluded to its low birth rate.
“Europe has become child-poor: We want everything for ourselves and place little trust in the future,” he said.
Pilgrims in rain ponchos filled three areas around the altar, some watching the pope on giant TV screens. Many of them were young people who had hiked, biked or taken buses to the remote site in the Austrian hills.
Unusually cold and rainy weather had turned nearby rivers into torrents and brought snow to surrounding hilltops. But the mood of the pilgrims was clearly not dampened.
“We can’t change the weather. The important thing is that the pope is here, the Holy Spirit is here,” said 19-year-old Georg Hanousek, who stood for hours in a drizzle awaiting the pope’s arrival.
Among the guests on the Mass platform was Monsignor Georg Ratzinger, the pope’s 83-year-old brother, who sat in the rain for a few minutes before he was led under a protective altar canopy.
The rain and wind forced the pope to ride in a car to the site 90 miles west of Vienna, instead of making the trip by helicopter as planned.
The pope used his sermon to focus on the idea of truth and to defend the church’s proclamation of Christ as the universal savior, which he said should not be seen as an act of intolerance.
“If we call (Christ) the one universal mediator of salvation, valid for everyone and, ultimately, needed by everyone, this does not mean that we despise other religions, nor are we arrogantly absolutizing our own ideas,” he said.
“On the contrary, it means that we are gripped by him who has touched our hearts and lavished gifts upon us, so that we in turn can offer gifts to others,” he said.
He said Christians want to proclaim the truth and will never accept a widespread “attitude of resignation” toward the truth – as if truth does not exist, or is something people can’t cope with.
Without truth as a guidepost, he said, modern scientific discoveries become double-edged, posing a terrible threat of destruction for human beings and the world.
The fear today is that proclaiming one’s faith in the truth might lead to intolerance, he said. That fear is historically well-grounded, he said. But to overcome it, people only need to look at two images of Christ at Mariazell: the child on his mother’s lap and the crucified Christ on the cross, he said.
These images tell people that truth prevails not through outside force, but by humility, love and the inner strength of its own genuineness, he said.
The pope said the church firmly believes in the enduring lessons of the Ten Commandments, and the commandments’ “yes” to life, family, justice and responsible love. But it would be wrong to see Christianity merely as a set of rules, he said.
“Christianity is more than and different from a moral code, from a series of requirements and laws. It is the gift of a friendship that lasts through life and death,” he said.
This friendship with Christ should be the focus of Marian devotion at Mariazell, he said, adding that modern pilgrims should be like early Christians, who had a “restless heart” and were looking for deeper meaning in life, and found it in Christ.
At the end of the liturgy, the pope presented representatives of Austrian parish councils with New Testament books, and encouraged them to continue their work of spiritual renewal in the church.
“Go with care and joy toward all, to communicate to them the gifts of salvation,” he told them.
Before leaving the altar, the pope prayed for two elderly Austrian men who died that day at Mariazell, both from heart attacks.
“I am sure Mary will lead them to paradise, because they were making a pilgrimage to Mary,” he said.
After the liturgy, the pope blessed and placed his hands on a replica of the Mariazell statue that was to be sent to China at the request of the bishop of Shanghai. Jesuit Father Federico Lombardi, the Vatican spokesman, told reporters the pope was pleased to see the Chinese Catholic community remembered during his pilgrimage.