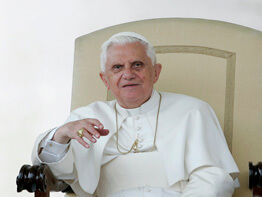 VATICAN CITY – Handouts to the poor are not enough; poverty must be tackled by overhauling social structures that deny people basic human rights, Pope Benedict XVI said at his weekly general audience.

“It is not enough to give alms and help the poor on a case-by-case basis,” he said, citing the teachings of St. John Chrysostom.

The saint saw that a new structure, based on the Christian vision of the human family, is needed, the pope said.

Pope Benedict returned briefly to the Vatican from his papal summer villa south of Rome for his Sept. 26 audience in St. Peter’s Square.

The pope continued a catechesis he began Sept. 19 that focused on the life and writings of St. John Chrysostom, the fourth-century doctor of the church and archbishop of Constantinople, now Istanbul, Turkey.

Pope Benedict said St. John Chrysostom was one of the great forefathers of the church’s social doctrine, and with St. Paul the Apostle he fostered the idea of a city built upon the primacy of the person.

St. John Chrysostom “corrected the traditional Greek vision of the polis, the city, in which large segments of the population were excluded from the rights of citizenship” and were trapped in poverty and slavery, the pope said.

St. John Chrysostom proposed a new kind of city inspired by Christian values, a city that had “a Christian soul and face” and in which “all people are brothers and sisters with equal rights,” the pope said.

A consequence of being part of the same human family is that people are then responsible for others and have a duty to act in solidarity and help those in need, he said.

Pope Benedict told some 20,000 pilgrims gathered in the square how St. John Chrysostom showed that God gave people four steps to get to know God, whom the saint called “a tender father, doctor of souls, mother and affectionate friend.”

People can first find God in his creation of nature, he said. In contemplating the beauty of creation, “creation almost becomes like a ladder for climbing up toward God, for getting to know God,” the pope said.

The pope said that, according to St. John Chrysostom, “we are weak for climbing, our eyes our weak” and may not see God, so God then helps people get closer to him by “sending fallen man, the stranger, a letter,” which is his word written in the sacred Scripture.

Reflecting on how nature and Scripture compliment each other, the pope said by reading Scripture “we can decipher creation, and creation shows us the realty of sacred Scripture.”

The third step, Pope Benedict said, is God becoming flesh and “really becoming God with us, our brother until his death on the cross.”

Finally, God acts through the Holy Spirit and transforms reality and individuals, the pope said.
The pope asked young people to look to St. Vincent de Paul, who founded many charitable organizations and whose feast day is celebrated Sept. 27.

The pope asked that St. Vincent’s example of charity encourage all young people to dedicate their future to offering “generous service” to others. He also asked newly married couples to foster “constant attention to the poor” in their new families.

At the end of the audience the pope greeted Cardinal Justin Rigali of Philadelphia, whom he had named a member of the Vatican’s Congregation for Bishops earlier in the day.