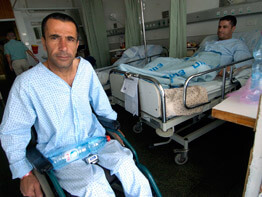 VATICAN CITY – Welcoming Israel’s new ambassador to the Vatican, Pope Benedict XVI urged Israel to help its Christian citizens remain in the country where they could be a force for peace and understanding.

“Christians are not alone in suffering the effects of insecurity and violence as a result of the various conflicts in the region, but in many respects they are particularly vulnerable at the present time,” the pope told Mordechay Lewy, the new ambassador.

Presenting his letters of credential to the pope May 12, Ambassador Lewy said, “We shall do our utmost to help strengthen the Christian communities in Israel as their essential presence in the Holy Land is deeply rooted and historically self-understood.”

The ambassador also asked the Catholic Church to continue working with Israel and Jewish groups in combating anti-Semitism, and he warned about increasing instability in the region, apparently in reference to Iran’s nuclear program.

While Ambassador Lewy said the Israeli government was committed to continuing the Middle East peace process, “the European continent and the entire Mediterranean region may face, however, nightmarish perils if the process of proliferation of weapons of mass destruction in the Middle East is not brought to a halt.”

“Against the backdrop of our traumatic experience in the middle of the last century,” the ambassador said, referring to the Holocaust, “no one should be surprised that we take such threats seriously.”

Offering his best wishes to Israel as it celebrates its 60th anniversary of statehood, the pope said, “The Holy See joins you in giving thanks to the Lord that the aspirations of the Jewish people of a home in the land of their fathers have been fulfilled and hopes soon to see a time of even greater rejoicing when a just peace finally resolves the conflict with the Palestinians.”

Many of the difficulties experienced by Christians in the region and the “alarming decline in the Christian population of the Middle East, including Israel, through emigration,” are connected to the Israeli-Palestinian conflict, he said.

Both communities, the pope said, have a right to the peace and security that will allow their people to flourish.

“Accordingly, I would urge your government to make every effort to alleviate the hardship suffered by the Palestinian community, allowing them the freedom necessary to go about their legitimate business, including travel to places of worship so that they, too, can enjoy greater peace and security,” he said.

Pope Benedict also asked the Israeli government to keep its promise to act seriously and quickly in the negotiations with the Vatican on a treaty settling questions regarding the tax status and some financial questions related to church institutions in Israel. The negotiations have dragged on for years.

And, he said, uncertainty over the legal rights and status of the Catholic Church in Israel, “especially with regard to the question of visas for church personnel,” continues to create difficulties for the Catholic community.

“Only when these difficulties are overcome will the church be able to carry out freely her religious, moral, educational and charitable works in the land where she came to birth,” the pope said.