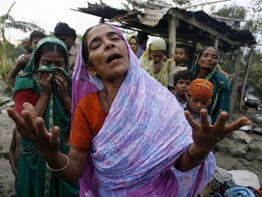 VATICAN CITY – Pope Benedict XVI urged international assistance for Bangladesh, where thousands were killed in one of the worst cyclones in the country’s history.

The pope expressed his condolences to the families of the dead and said he hoped the international community, which moved quickly to aid the survivors, would continue to provide relief.

“I encourage every possible effort to help these brothers and sisters who have been so sorely tried,” he said.

Officials estimated that at least 3,150 people died when the cyclone tore through coastal areas of Bangladesh Nov. 15 with winds estimated at 150 mph. Relief agencies said the final death toll could reach 10,000.

In Dhaka, Bangladesh, the head of the nation’s charitable agency said Caritas officials were rushing aid to areas along the coast.

“Though there were warnings of the cyclone, its impact has been deadly. The people have been badly affected,” Auxiliary Bishop Theotonius Gomes of Dhaka, chairman of Caritas Bangladesh and secretary-general of Catholic Bishops’ Conference of Bangladesh, told Catholic News Service Nov. 19.

Bishop Gomes said Caritas officials had rushed to the worst-affected areas like the port city of Chittagong to assess the needs of the affected people and plan the church’s relief work.

Caritas Bangladesh appealed for food aid and tarpaulins or plastic sheeting and blankets to provide shelter to the families rendered homeless by the cyclone.

“Crops have been destroyed in water-logged areas, fishermen communities and day laborers have lost their sources of income, and thousands of people are too poor to have any food stocks in their homes,” said the appeal.

Caritas said its national, regional and field offices had taken preventive measures and joined in cautioning the villagers along the coastlines to flee the coastal areas.

Many villagers could find no trace of their homes when they returned the next day.

Bishop Gomes said although many simple church structures in the areas have also been damaged there has been no report of damage to any major church properties.

Christians make up less than 1 percent of Bangladesh’s estimated 150 million people, nearly 90 percent of whom are Muslim; Hindus and Buddhists account for the rest of the population.

In his main talk at the Sunday Angelus, Pope Benedict spoke about how Christians are called on to face daily trials – including natural catastrophes – with the confidence of faith.

History follows its course, which includes human drama and suffering, but it still embodies a “design of salvation” introduced by Christ’s life, death and resurrection, he said.

Christians therefore should trust in God’s love as they cope with difficulties and apprehensions, he said.

“We don’t fear the future, even when it appears ominous, because the God of Jesus Christ, who took up history to open it up to its transcendent fulfillment, is its alpha and omega, the beginning and the end,” he said.

He said Christ guarantees that the entire meaning of the universe is contained in “every small but genuine act of love.”

Contributing to this story was Anto Akkara in New Delhi.